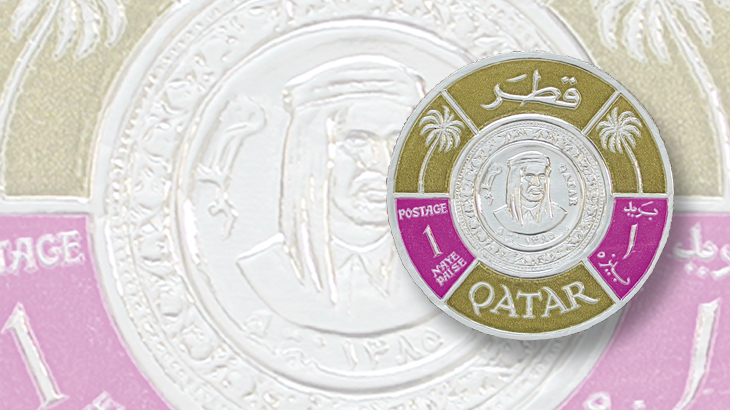 The 1966 Qatar set of 12 Sheik Ahmad Coin stamps (Scott 99-99L) printed and embossed on gold or silver foil are in demand in mint never-hinged condition and consistently sell for the 2016 Scott Standard Postage Stamp Catalogue value of $172.25.

Qatar occupies a small peninsula jutting from the eastern side of the larger Arabian peninsula. The roughly 300,000 Qatari citizens are among the richest people per capita in the world.

Qatar is a monarchy ruled by emirs of the al Thani family. Almost all Qataris ascribe to the strict Wahabist version of Sunni Islam.

Qatar was ruled by the Ottoman Empire from 1871 to 1915 and became a British protectorate in 1916. The protectorate began issuing stamps in 1957. The country became an independent sovereign state in 1971.

Qataris have a lot of money to spend on stamp collecting, and a few years ago all stamps of Qatar were in hot demand.

The market has cooled somewhat. Now only the best sets, including definitive issues, overprints in different colors and other unusual items, are in high demand.