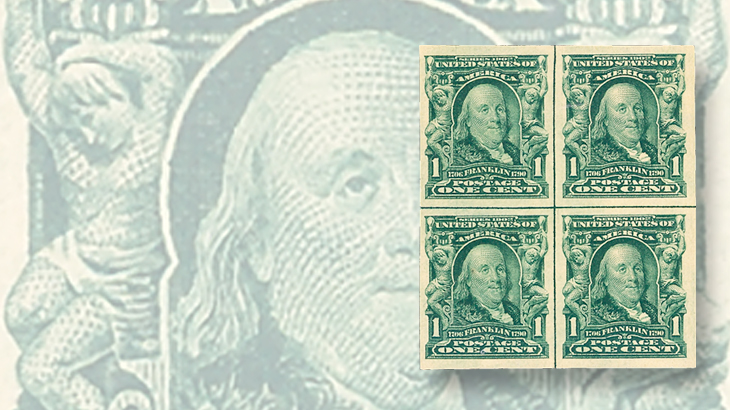 Centerline blocks of the United States 1906 1¢ Benjamin Franklin imperforate stamp (Scott 314) are in demand and are a good buy at the 2016 Scott Specialized Catalogue of United States Stamps and Covers value of $130 in both unused hinged condition and used condition.

Position pieces continue to attract the attention of specialist collectors.

Position pieces are stamp multiples with distinct marginal markings that identify where the stamps came from in the pane or sheet.

In 1906, the United States Post Office Department began providing imperforate sheets of 400 stamps to private stamp vending and affixing machine companies. The companies would cut the imperforate sheets into coil stamps and apply their own perforations so that stamps could be dispensed from their equipment.

Centerline blocks of the 1906 1¢ Benjamin Franklin imperforate stamp (Scott 314) are in demand. The 2016 Scott Specialized Catalogue of United States Stamps and Covers values the centerline block in unused hinged condition and in used condition at $130, and it is a good buy at that price.