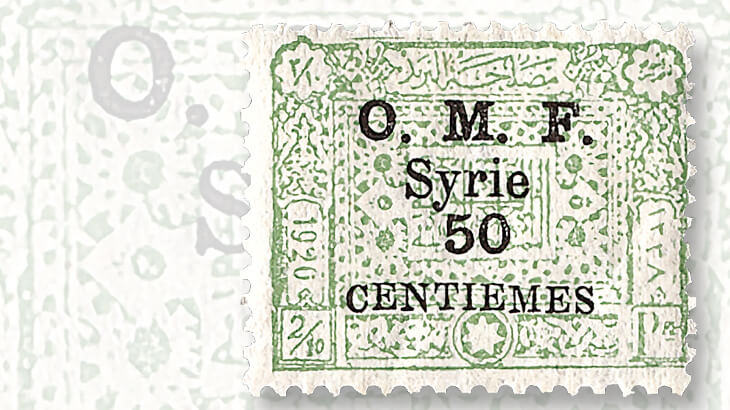 The 1921 French occupation of Syria overprinted and surcharged set of nine (Scott 82-90) is in demand and a good buy in unused hinged conditon at the 2017 Scott Classic Specialized Catalogue of Stamps and Covers 1840-1940 value of $40.75.

Aleppo, capital of the Aleppo Governate in Syria, was the third largest city in the Ottoman Empire and was the largest city in Syria prior to the disastrous multi-sided civil war with foreign interventions that are destroying the country. Ironically, the ongoing tragedy in Syria seems to have heightened collector interest in its stamps.

After World War I and the collapse of the Ottoman Empire, King Faisal I of Mecca established Syria as the independent Arab Kingdom of Syria. He had been a British ally and the titular leader of the Arab Revolt against the Ottomans during World War I. Unfortunately for him, the British and French had secretly assigned Syria to France in the secret Sykes-Picot Agreement. In April 1920, France won the brief Franco-Syrian War, and Faisal was dethroned and expelled to later become the king of Iraq.

In 1921, the French overprinted and surcharged nine issues of the Arab Syrian government for postal use (Scott 82-90). The letters “O.M.F.” in the overprint stand for “Occupation Militaire Francaise.” The 2017 Scott Classic Specialized Catalogue of Stamps and Covers 1840-1940 values the set in unused hinged condition at $40.75. This set is in demand and a good buy at the Scott catalog value.