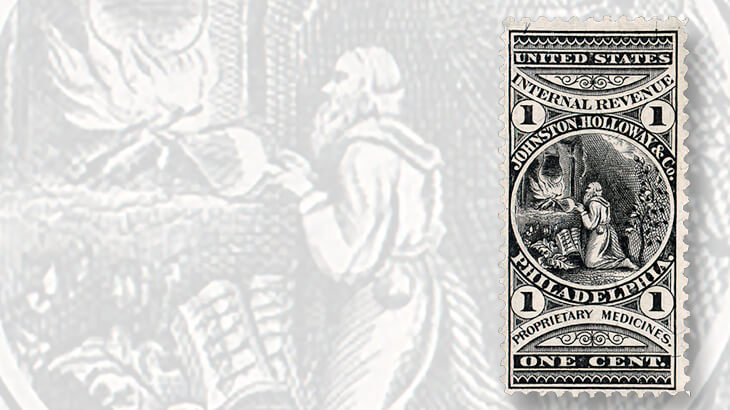 The market for private die proprietary revenue stamps remains one of the most active U.S. markets.

One of the most intriguing designs is the one used on the Johnston, Holloway & Co. 1¢ black stamp and 2¢ green stamp (Scott RS151-RS152). The design shows an elderly man in clerical robes kneeling before a fire, which he is fanning with a bellows. An iron cauldron hangs above the fire. The man has a long white beard, and his hair appears to be tonsured, leading us to believe that he is a monk.

These stamps were used to pay the tax on bottles of Hoofland’s Bitters, “A Sovereign Remedy for Liver Complaint, Jaundice, Dyspepsia, Nervous Debility, Asthma, Disease of the Kidneys, and all Diseases arising from a Disordered Liver or Stomach.”

The stamps, first issued about 1874, are known on silk paper (Scott R151b and R152b) and paper watermarked “USIR” (Scott R151d and R152d). The 2016 Scott Specialized Catalogue of United States Stamps and Covers values the stamps on silk paper at $4 apiece. The 1¢ stamp on watermarked paper is valued at $3, and the 2¢ on watermarked paper is valued at $3.25. Used stamps with small faults are a good buy at the Scott catalog values. Stamps with fewer or less noticeable faults bring a premium.