Top and bottom: rugby jersey from New Zealand and lederhosen from Austria 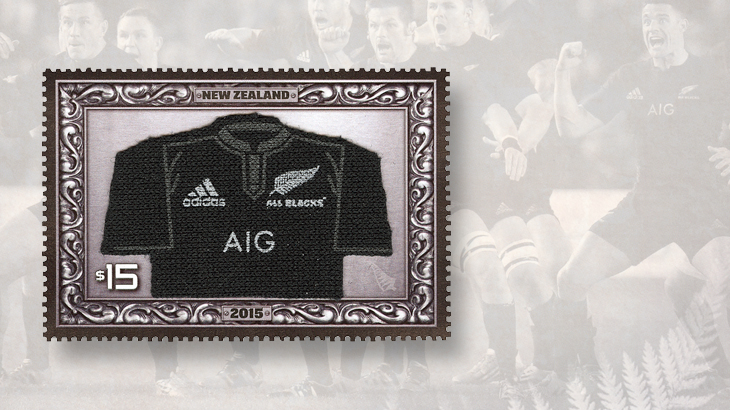 This New Zealand Post stamp is a replica of the home team jersey of the national rugby team, All Blacks. The jersey part of the stamp is printed on fabric. 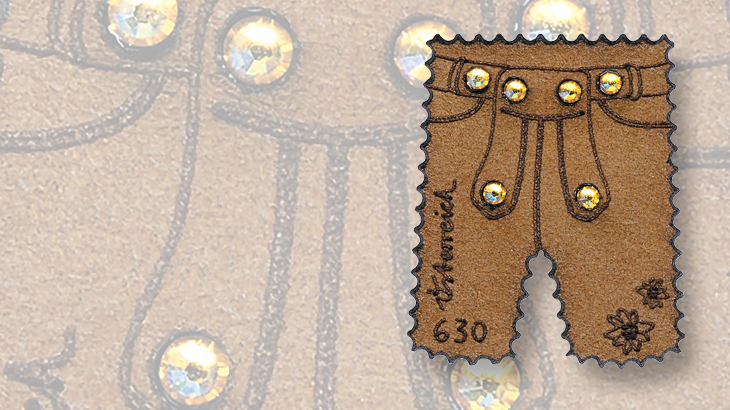 Austria’s new Lederhosen stamp was printed on leather and encrusted with Swarovski crystals.
Previous
Next

A recent stamp from New Zealand includes jersey fabric, while a stamp from Austria is printed on leather. If you put the two together, you come up with a mismatched outfit: a rugby jersey on top, and lederhosen on the bottom.

The $15 stamp from New Zealand was issued Sept. 2 to honor the national men’s rugby union team, nicknamed the All Blacks after the color of their uniforms.

New Zealand Post reports that the stamp contains real fabric supplied by Adidas, one of the team’s sponsors, from the home replica jersey.

The jersey on the stamp includes the Adidas logo on the left, with the logo of another sponsor, the insurance corporation AIG, in the center. The team’s logo of a silver leaf fern is on the right.

According to New Zealand Post, after the logos were printed on the fabric, it was die-cut in the shape of a jersey and then applied to gummed stamp paper. The design is completed by a frame, so that the stamp resembles a framed jersey that would be hung on a wall.

Dave Burke designed the stamp. Southern Colour Print printed it by a combination of offset lithography and screen printing.

New Zealand Post is selling the stamp encased in plastic in a special cardboard folder with additional images and information about the All Blacks.

Austria’s 6.30 Lederhosen stamp issued Sept. 24 is cut in the shape of a pair of these alpine leather shorts. And not only is it printed on leather, it also is embellished with Swarovski crystals.

Jorg Pribil, head of stamps and marketing for Austria Post, in the September issue of its Album magazine for collectors, explained the connection between lederhosen and Swarovski, calling them both landmarks of the Tyrol region.

The Swarovski company designed and printed the new Lederhosen stamp in a quantity of 150,000, and described the stamps as being made from Alcantara leather, an artificial suede.

Six crystals are affixed to each stamp. The design also includes edelweiss flowers on one pant leg and the denomination and country name on the other.