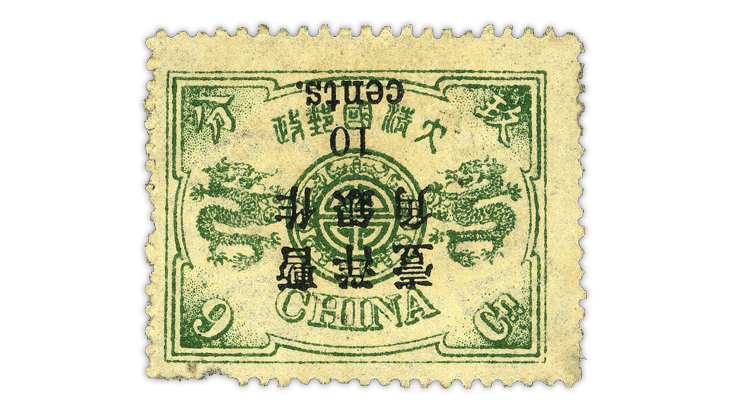 Only four examples are known of China’s rare 1897 10¢-on-9-candareen dark green stamp with the small-figures surcharge inverted. This unused stamp will be offered at auction in Hong Kong Jan. 18 (beginning the evening of Jan. 17 in North America). 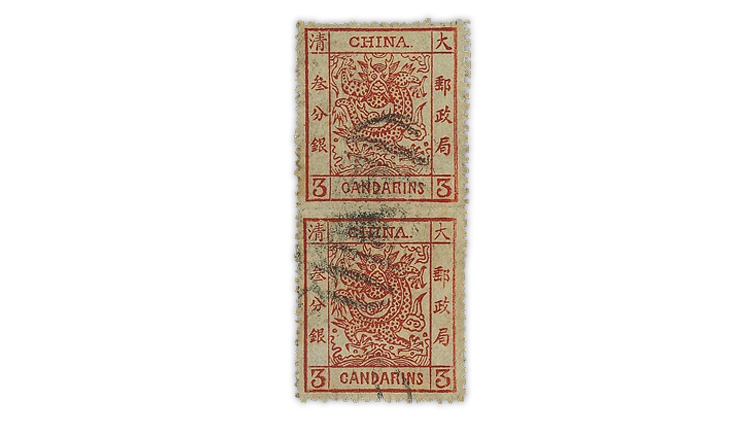 An imperforate-between vertical pair of the 1883 China 3ca Large Dragons issue on thicker paper. The rare variety will be offered during the Jan. 18-20 Spink auction in Hong Kong.
Previous
Next

An extraordinary stamp rarity of 19th-century imperial China will be offered during the Jan. 18-20 auction series by Spink China in Hong Kong.

The unused stamp, from the 1897 new currency surcharges with small figures, is the 10¢-on-9-candareen dark green Dragons and Shou stamp from the Empress Dowager issue, with the 10¢ surcharge inverted.

It is described as having a trace of gum, with “a pulled perforation at the foot of the stamp, otherwise a very fresh stamp with bright colour and on white paper. A magnificent example of this legendary stamp, considered the rarest and most sought-after Dowager surcharge.”

The stamp is part of the Lam Man Yin collection of Small Dragons, Dowagers and 1897 surcharges, which is being auctioned by Spink China beginning Jan. 18 at 10 a.m. local time in Hong Kong (9 p.m. Eastern Time on Jan. 17).

“Only four examples of this stamp have been recorded, two unused and two used,” according to Spink.

The rare invert variety carries an estimate in the Spink sale of HK$5 million to HK$6 million, which converts to approximately $638,000 to $766,000 in U.S. dollars in late December.

Along with the Lam Man Yin collection, the auction series offers part 1 of the Fortune Wang collection of the treaty ports of the Shanghai postal system, and an additional general sale described as fine stamps and covers of China and Hong Kong.

The latter sale, commencing at 10 a.m. Hong Kong time on Jan. 20,
includes another significant rarity, an imperforate-between vertical pair of the 1883 China 3ca Large Dragons issue on thicker paper. The stamps are canceled by the strike of an indistinct black seal cancellation, and Spink reports a light fold in the margin between the stamps.

“This is one of the most important varieties of the Large Dragon issue with only three verified pairs known (a fourth pair has been reported),” Spink notes. “These examples originate from two different sheets.”

The auction catalogs are available in PDF form for downloading at the website.