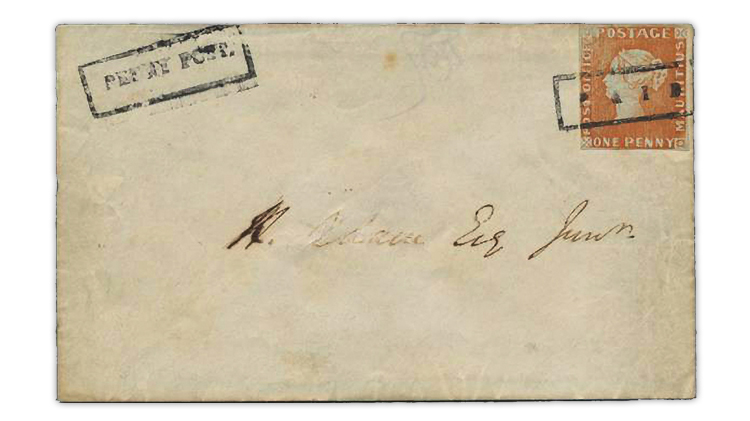 The famed 1847 Mauritius Ball cover, one of three known franked with the Mauritius 1-penny orange Post Office stamp, sold for the equivalent of almost $12 million during a Christoph Gaertner auction in June in Germany. The realization is believed to be th

As 2021 comes to a close, we pause to take a look at some of the major news stories that made headlines throughout the year. The COVID-19 global pandemic continued to dominate headlines and affected many different facets of the stamp world and beyond.

Also making headlines were some standout philatelic items that hit the stratosphere of top realizations.

The surprise for me was the famed Mauritius Ball cover, the only one in private hands, that was sold for nearly $12 million in June by the German auction firm Christoph Gaertner.

This is believed to be the highest price paid for a philatelic item. Before that, the record holder was the British Guiana 1¢ Magenta that was sold by Sotheby’s in 2014 for $9.48 million.

That British Guiana stamp also made headlines this year when it was sold in June for $8.3 million to the Stanley Gibbons firm. Gibbons is now selling fractional ownership of the stamp and has it on display at its flagship location in London.

The United States Postal Service continued to make headlines this year. For stamp collectors and for Amos Media Co. as a small publishing firm, the two rate increases that took place in January and again in August hit the wallet hard.

Counterfeiters seem to be taking full advantage of these higher postage rates by offering discounted prices on fake stamps. A significant number of these counterfeits have turned up, which isn’t a positive for the hobby. Collectors buying bulk lots of postage on the secondary market will need to be cautious when making these purchases.

In 2021, the Postal Service resumed selling no-die-cut press sheets, but not without a few bumps on the restart. Low quantities of some of the issues resulted in rapid sellouts and several upset collectors who weren’t able to add the press sheets to their collections.

In May, the Postal Service resumed having in-person first-day-of-issue ceremonies. Fewer stamps were issued in the early part of the year, and you could tell the USPS was waiting to hold events again. Throughout the summer, there was almost a ceremony each week from May through mid-August.

Reports of new U.S. errors were covered by Linn’s throughout the year and even included a new find on a 1967 stamp. This tagging-omitted 20¢ George C. Marshall stamp (Scott 1289b) was discovered by Henry Gitner and was one of two new errors he found this year.

Late in the year, the mainstream media began reporting endlessly on supply chain issues with products coming into the United States. This unfortunately has affected the importing of stamp hobby supplies for not only us at Amos Media Co., but others as well.

Also this year, stamp shows and exhibitions slowly started again worldwide, but a few major shows were canceled in October. The show calendar is already filling up for next year, so maybe there is a glimmer of hope for a positive 2022.