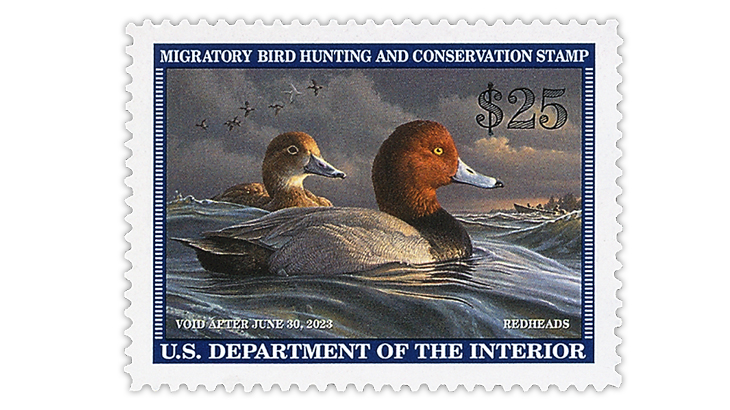 In 2022, the Federal Duck Stamp Office reintroduced engraving to its migratory bird hunting and conservation stamp.

As 2022 comes to a close, we pause to take a look at some of the major news stories that made headlines throughout the year.

Many of the counterfeit stamps are being sold at 50 percent of face value through multiple online outlets. The Scott catalog editors included a note in the 2023 Scott Specialized Catalogue of United States Stamps and Covers stating that the print version of the catalog would “only list denominated and earlier counterfeits.” In other words, new examples of counterfeited forever stamps would not be listed in the print catalog. The digital edition will continue to list known counterfeits of all U.S. stamp issues.

Inflation was one of the words of the year, and it was noticeable in the postal community. Postage rate increases occurred in both January and July of 2022, plus a temporary holiday increase in October. And another rate increase is set to take effect Jan. 22 with yet another planned for this summer.

This meant that U.S. forever stamps saw some significant increases in Scott catalog values. Additionally, the Scott catalog editors increased the minimum value of single unused postage stamps from 25¢ to 30¢.

Also, with the July 2022 rate increase, a 97-year-old U.S. mail service came to a close. Special Handling is no longer offered for mailing items, and Linn’s July monthly issue carried a feature about the history of the service.

The Philatelic Foreword columns in the June 27 and July 25 issues of Linn’s highlighted a welcome return to the federal duck stamp program: engraving. The 2022-23 $25 Redheads migratory bird hunting and conservation stamp included intaglio ink and went a step further with an embossed duck in flight and tagging applied in an oval shape.

In March, Linn’s published a special edition honoring 76 individuals in the hobby in 73 profiles. Titled Most Influential Philatelists and Their Epic Stamp Stories, this special edition recognized collectors, dealers, auctioneers and individuals who are professionally involved in hobby organizations and postal administrations.

In 2022, Linn’s tally hit 42 known of the 100 specially printed panes of the upright variety of the 2013 $2 Jenny Invert stamp (Scott 4806). Two recently reported finds were from panes purchased from the Postal Service’s Stamp Fulfillment Services center in Kansas City, Mo., the only venue that has them in stock. The original distribution of the panes included post offices, but the unsold panes were recalled to Stamp Fulfillment Services for sale.

Stamp shows and exhibiting at shows returned to a regular rhythm in 2022 after being disrupted by the COVID-19 pandemic. Vince King was named the Benjamin and Naomi Wishnietsky World Series Champion of Champions award winner at the 2022 Great American Stamp Show Aug. 25-28 in Sacramento, Calif., for his innovative multiframe exhibit, “In the Beginning … Timbromanie, The Proliferation of Postage Stamps Inspires a Collecting Revolution.”

Jan Hofmeyr was named the single-frame Champion of Champions award winner at the 2022 Chicagopex stamp show held Nov. 18-20 in Itasca, Ill., with his exhibit, “The Process That Led to the ‘Grill’ Stamps of the United States. From First Experiments to the Earliest Z-Grills.”

Ukraine made headlines throughout the year with new stamp issues with provocative designs jabbing at Russia; the two countries have been at war since Russia invaded Ukraine in February. The stamps garnered interest beyond the philatelic community with many news outlets running stories about them.

On Sept. 8, the world lost an icon when Queen Elizabeth II died. The philatelic world will soon see the ripple effect of that loss with the definitive stamps that Great Britain uses and also with the stamps of the British Commonwealth nations.

Great Britain’s Royal Mail also made headlines early in the year when it started putting barcodes on its definitive issues and stated that in 2023 it would devalue any definitive without a barcode.

It has been an interesting year, to say the least, with lots of ups and downs. Here’s looking forward to a 2023 that I’m sure we will continue to have lots to write about.