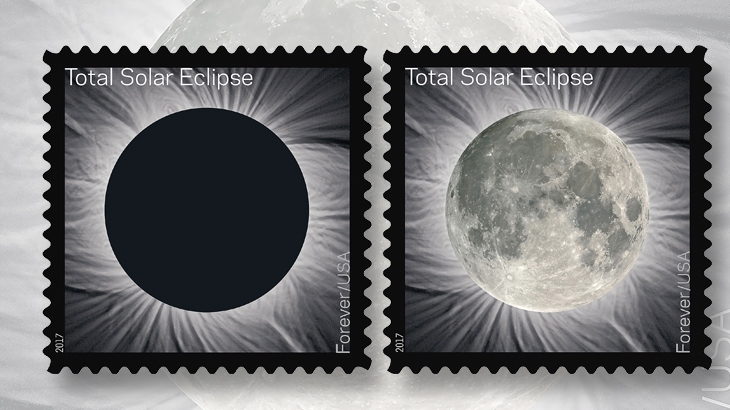 A new United States forever stamp will commemorate the total eclipse of the sun that will be visible Aug. 21 in a path that traverses the United States. The stamp is pictured at left as it will appear normally; when warmed, an image of the moon will appea 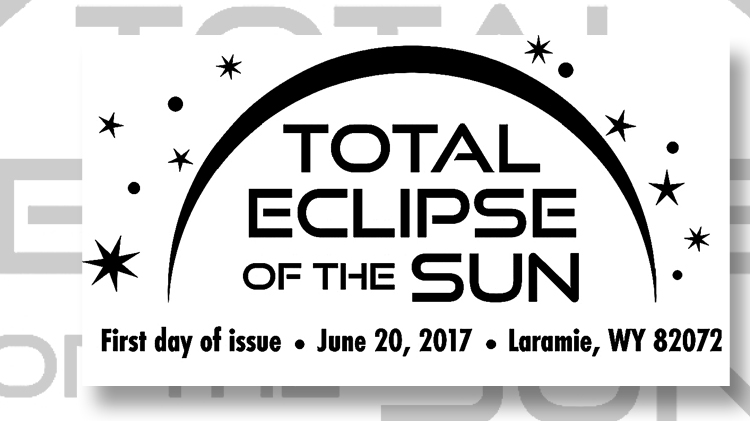 The U.S. Postal Service has prepared two pictorial first-day cancels for the Total Solar Eclipse issue. The black postmark shows stars and an arc that represents an eclipse in progress. 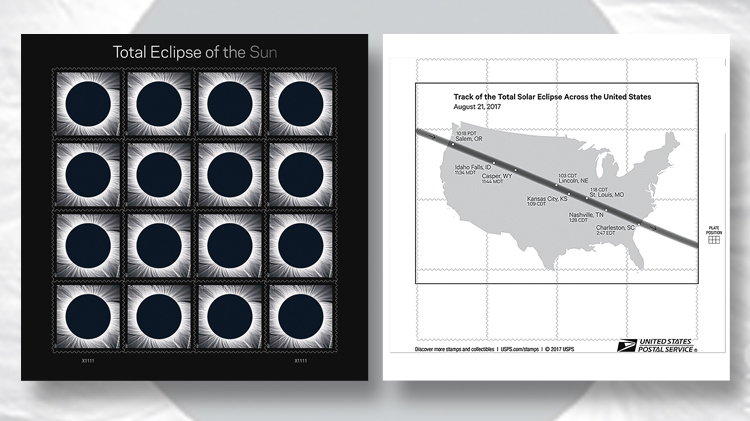 The Total Solar Eclipse forever stamps will be issued in a pane of 16 that will include a map on the reverse showing the path of totality, where the sun will be completely blocked by the moon for a time during the Aug. 21 eclipse. 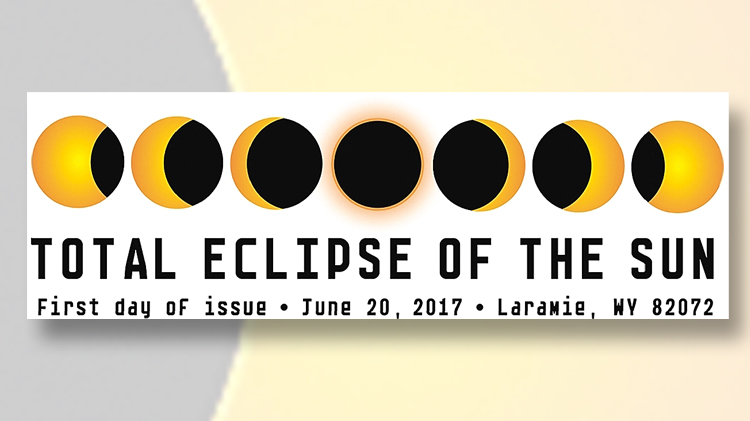 The color first-day postmark for the Total Solar Eclipse stamp features phases of the event. 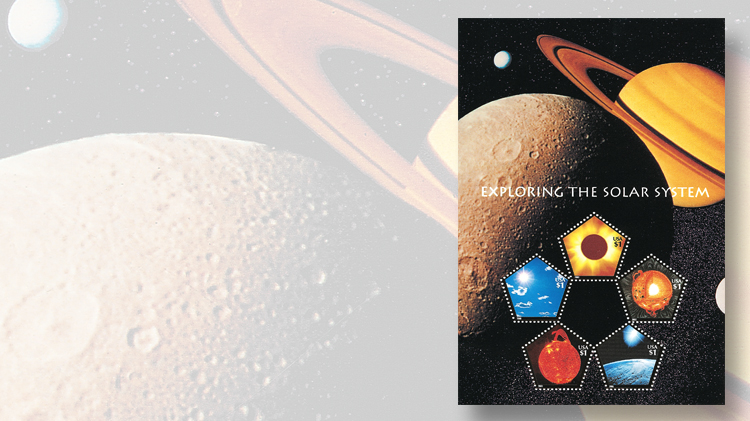 The top stamp in the Exploring the Solar System pane issued July 17, 2000, shows a solar eclipse. 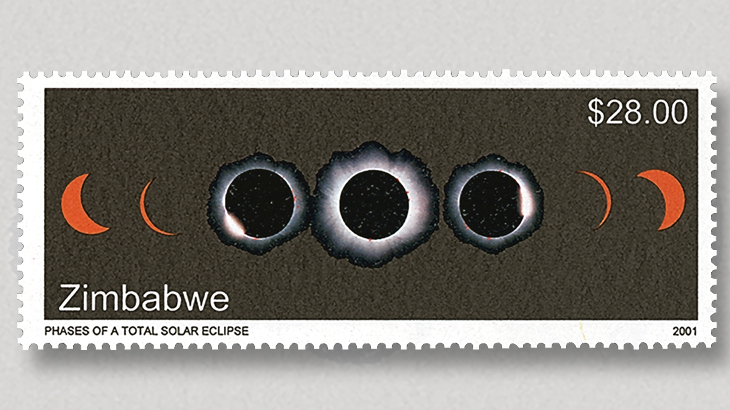 Numerous stamps from countries around the world celebrate solar eclipses. In 2001, Zimbabwe issued this $28 stamp, one of a set of three, showing phases of a solar eclipse.
Previous
Next

A total solar eclipse will be visible within a 70-mile-wide path across the United States Aug. 21, and the U.S. Postal Service is issuing an innovative new stamp in advance of the event.

Part of the new nondenominated (49¢) Total Solar Eclipse forever stamp is printed with a thermochromic material that will normally appear as a black disk on the stamp, representing the moon blocking the sun, as viewed from Earth.

When the thermochromic element is warmed slightly, by a human hand lightly rubbing the design, for example, an image of the moon will appear. It will revert to blackness once the stamp cools.

This is the first U.S. stamp to feature a thermochromic element. As Linn’s editorial director Donna Houseman noted in her June 5 Editor’s Insights column, other countries have used similar material on their stamps, including Great Britain.

“Thermochromic inks are vulnerable to UV light and should be kept out of direct sunlight as much as possible to preserve this special effect,” the Postal Service has stated. “To help ensure longevity, the Postal Service will be offering a special envelope to hold and protect the stamp pane for a nominal fee.”

The protective sleeve will be available from USPS Stamp Fulfillment Services as item No. 475329 for 25¢.

The Total Solar Eclipse forever stamp will be issued June 20 in a pane of 16. A first-day ceremony will take place at 1:30 p.m. at the University of Wyoming Art Museum in Laramie, in association with the university’s celebration of the summer solstice.

Shortly before the ceremony, at noon on the summer solstice, visitors should be able to view an unusual event when a single beam of sunlight shines on a silver dollar embedded in the floor of the museum’s Rotunda Gallery.

The photographs on the new stamp were created by astrophysicist Fred Espenak. The eclipse photo was captured March 29, 2006, in Jalu, Libya.

Espenak describes the image as “a High Dynamic Range composite made from 22 separate exposures.”

Espenak also took the moon photograph that is revealed when the stamp is warmed.

Known as “Mr. Eclipse,” Espenak maintains the website MrEclipse.com, which is filled with details and photographs about eclipses in general, including information about the upcoming 2017 total solar eclipse.

Espenak is coauthor, with Mark Littmann and Ken Willcox, of Totality — Eclipses of the Sun, published by Oxford University Press, and he also writes an online astronomy blog titled Portal to the Universe.

Espenak retired in 2009 after working for more than 30 years at NASA’s Goddard Space Flight Center.

Printed on the back of the Total Solar Eclipse stamp pane is a map of the United States showing the path of totality: those locations where the sun will be completely blocked as the moon passes between it and Earth.

According to the Postal Service: “The 70-mile-wide shadow path of the eclipse, known as the path of totality, will traverse the country diagonally, appearing first in Oregon (mid-morning local time) and exiting some 2,500 miles east and 90 minutes later off the coast of South Carolina (mid-afternoon local time).”

Along with the 16-stamp pane sold at post offices, the Postal Service plans to offer an undisclosed quantity of press sheets of the Total Solar Eclipse forever stamp that each consist of eight unsevered panes and sell at face value for $62.72.

The Postal Service has announced that mint Total Solar Eclipse stamps will not be offered for sale in quantities smaller than the 16-stamp pane.

Two uncacheted first-day covers for the new stamp will be offered by the Postal Service.

One is struck with a black postmark depicting fanciful stars around a black arc resembling a segment of an eclipse as it reaches near totality.

The other has a multicolor pictorial postmark showing an array of sun images during the phases of an eclipse.

Stamp collectors might recall that a total solar eclipse has been pictured previously on a United States stamp.

As part of a series of stamps issued over several days during World Stamp Expo 2000, a pane of five $1 pentagonal stamps was issued with the title Exploring the Solar System.

Each stamp on the pane shows different views of the sun, including one photographed from a satellite that pictures the sun during a total solar eclipse (Scott 3410a).

Many other countries around the world also have featured eclipses on issued postage stamps.

The stamp’s design displays the spectacular solar corona at the moment of totality.

The $8 stamp features solar prominences, the $21 stamp shows the eclipse path over Africa, and the $28 stamp depicts phases of a solar eclipse.

Technical details and first-day cancel ordering information for the new Total Solar Eclipse forever stamp are given below.

Standard ordering instructions apply. Collectors requesting first-day cancels are encouraged to purchase their own stamps and affix them to envelopes. The first-day cover envelopes should be addressed for return (a removable label may be used), and mailed in a larger envelope addressed to FDOI-Total Eclipse of the Sun, USPS Stamp Fulfillment Services, Cancellation Services, 8300 NE Underground Drive, Suite 300, Kansas City, MO 64144-9900.

Requests for first-day cancels must be postmarked by Aug. 20.

The Postal Service’s uncacheted first-day cover for the Total Solar Eclipse stamp is item 475316 at 93¢.