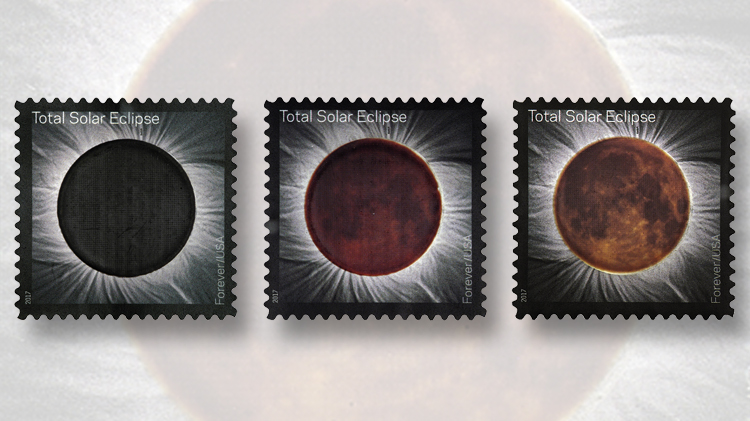 Linn’s conducted a four-week experiment to see how excessive light and high temperatures affect the thermochromic ink disc covering the moon on Total Solar Eclipse stamps. At left is a normal (control) stamp. The middle stamp was exposed to near constant 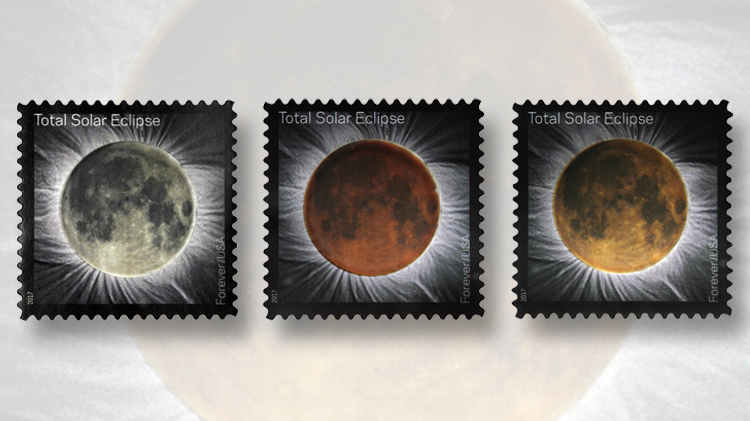 Shown are the same three Total Solar Eclipse stamps from the first illustration (in the same order) after being warmed briefly on a hot plate. The story provides qualitative descriptions of the color changes of the moon in relation to the reactivity of th
Previous
Next

On June 20, the United States Postal Service issued its Total Solar Eclipse commemorative forever stamp (Scott 5211) to heighten anticipation of the eclipse that passed over the continental United States Aug. 21.

When the black disc covering the moon is warmed, as from the touch of a finger, the moon is revealed. When the stamp cools, the black color returns and the moon is hidden once more.

This clever trick, the first of its kind for a U.S. stamp, is the result of heat-reactive thermochromic ink.

Not long after the stamp was issued, we began receiving complaints from collectors who were displeased because the mint panes had ripples in them that prevented them from laying flat.

Linn’s observed this rippling in the panes purchased for the Scott editorial staff’s reference collection.

Mark Saunders, a USPS spokesman, explained that the observed rippling was due to a “layering” process used to apply the thermochromic ink during printing.

At the time the stamp was issued, the Postal Service also made available (for 25¢) what it calls a “protective sleeve” — a black opaque envelope for storing an intact 16-stamp pane of Total Solar Eclipse stamps.

Thus housed, the pane would be kept in complete darkness, and the properties of the thermochromic ink would not degrade.

Which raises an important question: How resilient, so to speak, is the reactivity of the thermochromic ink?

One served as control by being kept in darkness at a room temperature of approximately 72 degrees Fahrenheit.

The other two stamps were each affixed to a white index card. One card was then taped about a half inch below a fluorescent desk lamp, which remained on 24 hours a day.

This treatment subjected the stamp to near constant conditions of lighting and elevated temperature.

The card was removed from the dashboard in the evening and left in the car, when the car was garaged at the editor’s home.

This treatment exposed the stamp to variable conditions of sunlight and temperature.

The two stamps were checked each week for a four-week period, to ascertain the effects of light and high temperature on the thermochromic ink.

These same results were obtained after two weeks.

After three weeks, however, the thermochromic properties of the ink on both stamps began to degrade, with the dashboard stamp exhibiting greater qualitative changes.

At the end of the fourth week, the degradation of the ink was even more pronounced.

Here are the findings at the end of the experiment, as recorded by a Linn’s editor:

These observations are seen in the trio of Total Solar Eclipse stamps photographed at room temperature. On the left is a normal (control) example, with a completely black thermochromic ink disk hiding the moon.

Note that the moon is visible on both the middle and right stamps.

For both of these stamps, the reactivity of the thermochromic ink has been degraded — more so for the right stamp than for the middle stamp.

This is not surprising because the right stamp was exposed to more intense light and much higher temperatures.

When briefly warmed on a hot plate, the three stamps appear as shown in the second illustration.

The moon on the control stamp looks as expected, the moon on the middle stamp appears dark orange, and the right stamp shows a somewhat lighter orange color.

Overall, the color transition of the moon was most pronounced for the control stamp; the moon on the stamp on the right showed very little change.

Keep in mind that these are qualitative observations. Nonetheless, it is obvious that the thermochromic ink on Total Solar Eclipse stamps is sensitive to extended exposure to light and elevated temperatures.

As such, it is recommended that you keep your stamps in darkness in a cool location in your home.

You could use the Postal Service’s black “protective sleeve” (envelope), but it is unknown if the envelope paper is of archival quality and thus suitable for long-term storage.

Postal Service spokesman Mark Saunders told Linn’s that “the protective sleeve is made of 60-pound stock black paper, and it protects against light.” He did not specify if the paper is archival.

However, he did confirm that “exposure to heat and ultraviolet light will cause the black [thermochromic ink] to fade to clear exposing only the underlying image” of the moon.

Linn’s asked Saunders at what ambient temperature the thermochromic ink starts to fade to clear. “Sorry, but that is proprietary information,” he replied.

The Denver Post reported Aug. 16 that the black component of the ink begins to disappear (revealing the moon) at approximately 84.2 degrees Fahrenheit.

The official name of the ink is “UV Screen Black 29 degrees Celsius.”

“The fat, similar to fats used in lipsticks and lotions, melts at 29 degrees Celsius, approximately 84.2 degrees Fahrenheit. It’s mixed with a leuco dye that can switch from color to colorless. Then the company adds a developer, which injects a proton into the dye, making the ink go black.”

The developer and the dye separate from one another when the fat melts, and that proton wants to attach to the fat, thus causing the ink to change from black to clear.

When the fat cools, the proton jumps back to the developer, which makes the dye revert to black.

One final observation — if you can see a hint of the moon on your stamps, don’t panic. It likely means the ambient temperature is warm enough to keep the thermochromic ink clear in color, not that your stamps are defective.

Just place the stamps in a cooler location, and the ink will go black once more.