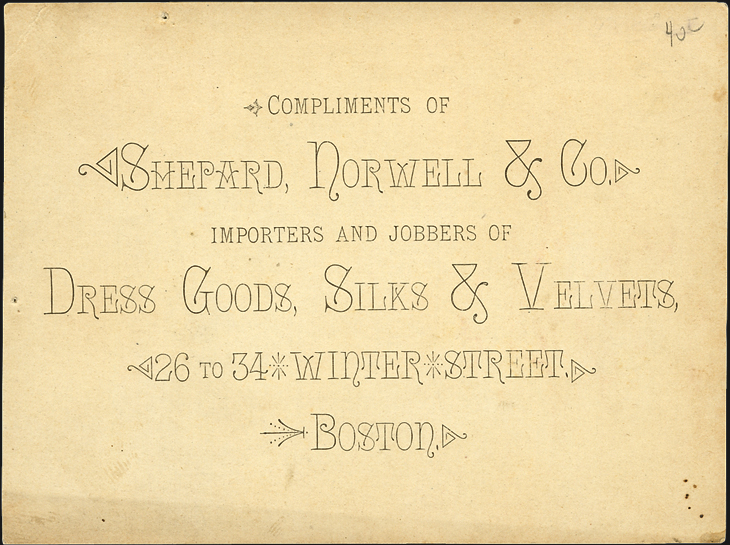 This advertisement for Shepard, Norwell & Co. of Boston appears on the back of the trade card shown at right in the previous illustration. 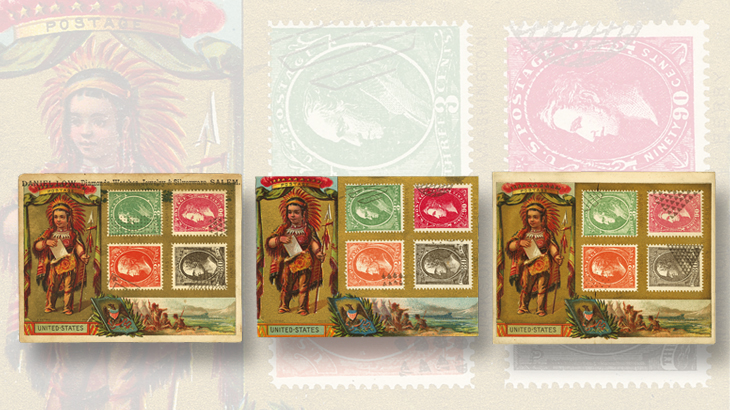 Notice the color variations in the printed stamp images and the differing cancellations on these three 19th-century trade cards.
Previous
Next

As a fan of 19th-century trade cards that depict United States stamps, I’m pleased to share two examples of what appear at first glance to be the same card.

The cards have the same margin design and show the same four stamps from the definitive series of 1870-71. However, they are not the same.

One card bears this message: “Use Eastman’s Fraxinella Perfume” printed at the bottom. The back of this card is blank.

The other card has no printing at the bottom, but has this printed on the back: “Compliments of Shepard, Norwell & Co. Importers and jobbers of Dress Goods, Silks & Velvets, 26 to 34 Winter Street, Boston.”

Seven of the nine such cards I’ve seen have blank backs. The other ad I have found on the back reads, “Sharpless & Sons Importers, Jobbers & Retailers of Dry Goods, 801, 803, 805 & 807 Chestnut Street Philadelphia.”

Another card has the following inscription on the top front: “Daniel Low, Diamonds, Watches, Jewelry and Silverware, Salem.”

There are other differences as well. For example, in the three cards illustrated nearby, there are subtle differences in the colors of the stamps from card to card, especially in the 2¢ orange and the 9¢ red.

I wonder how many versions there might be of these cards? Reports of others are welcome.