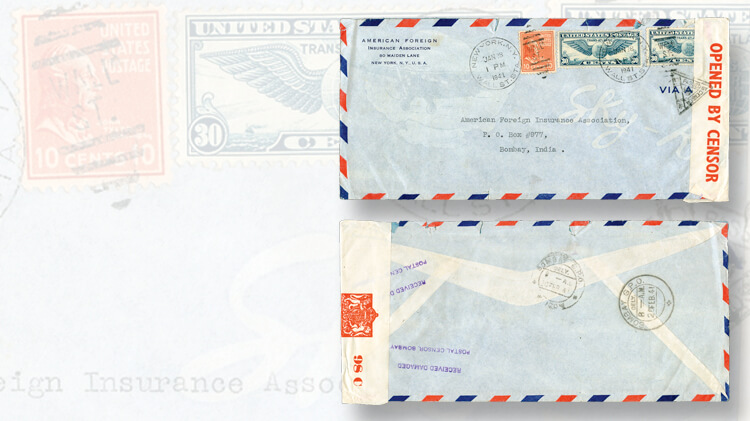 Sent almost a year before the attack on Pearl Harbor, this Jan. 28, 1941, airmail cover from New York City to Bombay, India, went by the Pan American Airways FAM 14 trans-Pacific route to the Philippines, and onward from there to its destination by foreign carriers. One brown-red 10¢ John Tyler stamp and two dull blue 30¢ Winged Globe airmail stamps, Scott 815 and C24, paid the 70¢ single airmail letter rate to India. 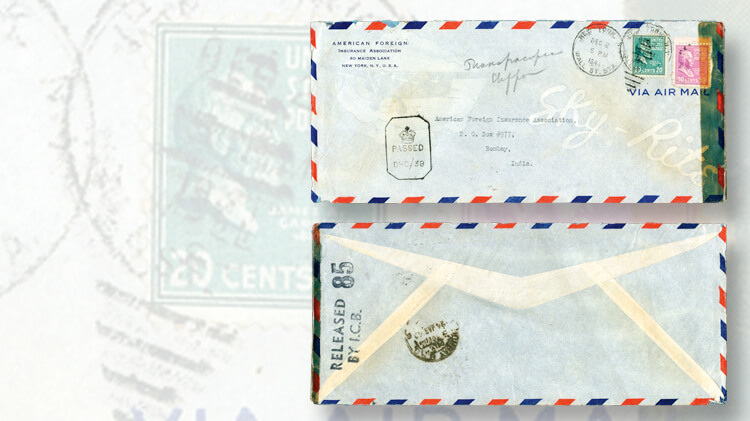 This Dec. 2, 1941, airmail cover was en route from New York to Bombay, approaching Hawaii on the morning of Dec. 7 when Japanese aircraft began bombing the U.S. Navy fleet at Pearl Harbor. Anzac Clipper was diverted to Hilo, where the mail was unloaded. The cover was censored by the Information Control Branch of the military government, then returned to the United States and rerouted for trans-Atlantic transport to India. It arrived at Bombay March 24. One bright blue-green 20¢ James A. Garfield stamp (Scott 825) and one mauve 50¢ William Howard Taft stamp (831) paid the postage. 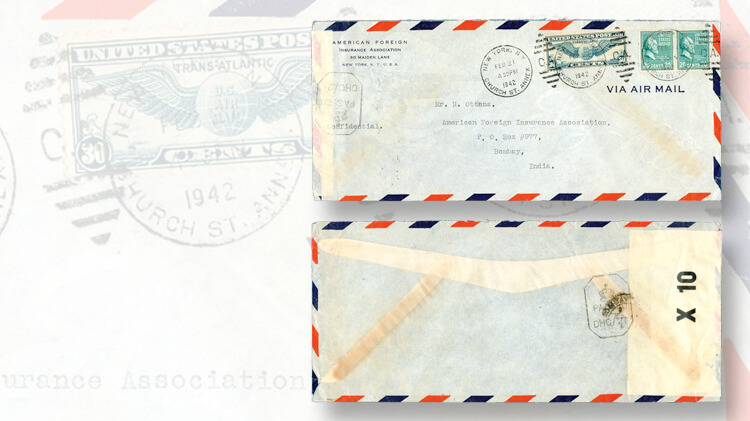 With trans-Pacific flights west of Hawaii suspended, this Feb. 21, 1942, airmail cover from New York to Bombay went by the FAM 22 trans-Atlantic route. A pair of 20¢ Garfield stamps and a single 30¢ Winged Globe airmail stamp paid the correct rate.
Previous
Next

The surprise attack on Pearl Harbor by the armed forces of Japan 75 years ago devastated the United States Navy’s Pacific Fleet and thrust America into World War II.

It abruptly severed trans-Pacific airmail communication that had transported urgent letters and parcels to and from the Far East since 1935.

At first Pan American Airways had operated Foreign Air Mail Route No. 14 (FAM 14) only between San Francisco and Manila, with intermediate fueling stops at Honolulu, Midway Island, Wake Island, and Guam. The only onward service before 1937 was by surface ship.

In April 1937 FAM 14 was extended to Hong Kong and Macao on the Asian mainland. Onward airmail service beyond Manila as far as India became available by connecting to KLM/KNILM Royal Dutch and British Imperial Airways flights at a rate of 70¢ per half ounce, which remained in effect until Nov. 1, 1946.

In 1939, Imperial Airways became British Overseas Airways Corp. (BOAC). In 1940, as war in Europe prevented trans-Mediterranean airmail flights, FAM 14 service became even more essential. To compensate for the loss of service from Europe, BOAC had inaugurated its so-called Horseshoe Route between Australia and South Africa with service to and from the Dutch East Indies, Malaya, Thailand, Burma, India, Arabia, Iraq, Palestine, Egypt, and East Africa. In May 1941, Pan Am extended FAM 14 all the way to Singapore.

Under those arrangements, airmail from the United States could fly across the Pacific to all those destinations, and could continue onward as far as Turkey and Greece by surface transport from Egypt. But those essential communication lifelines were lost in December 1941 in the aftermath of coordinated Japanese military attacks on Hawaii, Wake Island, Guam, the Philippines, Dutch East Indies, Malaya and Singapore, and Hong Kong.

Three covers from a single correspondence illustrate the consequences.

A Jan. 28, 1941, cover from New York City to Bombay, India, departed San Francisco Feb. 5 on the Martin M-130 China Clipper flying boat for an intermediate stop at Los Angeles, but was forced by bad weather to return to San Francisco. The flight finally got under way Feb. 12 and arrived at Manila Feb. 17. Foreign carriers transported it to India, arriving Feb. 20 at Bombay. There it was opened, examined, resealed, and passed before being delivered.

United States to India, diverted by the bombing of Pearl Harbor

The second cover, posted Dec. 2 at New York, began its trans-Pacific journey Dec. 6 on the same route aboard the Boeing B-314A Anzac Clipper. The flying boat actually had taken off late on the afternoon of Dec. 5, but experienced mechanical trouble 400 miles out and had to return to San Francisco.

After being repaired, the flying boat had been rescheduled to leave at 2 p.m. on Dec. 6, but had been granted a half-hour postponement of the departure time to allow the pilot to attend his daughter’s first piano recital at Oakland.

At 8 a.m. the next day, Anzac Clipper was less than an hour away from Honolulu when its radio officer received a coded flash warning that Pearl Harbor was under Japanese air attack. The providentially late departure from San Francisco had delayed Anzac Clipper’s approach just long enough to have kept the vulnerable aircraft out of harm’s way.

Pan Am’s “Plan A” secret instructions in the event of war rerouted Anzac Clipper to Hilo, Hawaii, 220 miles southwest of the combat zone. Gen. Walter C. Short, the military governor of Hawaii, had immediately declared martial law in the islands and had ordered the newly created Information Control Branch, headquartered beside the Honolulu post office, to open and examine all transit and outbound civil mail.

Anzac Clipper’s mail was forwarded to Honolulu for censorship, denoted by the handstamped RELEASED BY I.C.B. 85 marking in black ink over the cellophane tape seal on my cover. With trans-Pacific flights beyond Hawaii suspended, the letter was eventually returned to San Francisco. In the meantime, on Dec. 6 Pan Am had inaugurated FAM 22 service from Miami to Africa and the Near East.

With trans-Pacific service blocked after Dec. 7, the Post Office Department directed all mail for foreign destinations previously served by FAM 14 to be sent to Miami for dispatch by the South Atlantic service, and the Civil Aeronautics Board extended that route as far to the east as Singapore at a secret hearing in late December.

Advancing those flights eastward under the stress of war mobilization could not be implemented until sufficient aircraft, crews, and ground facilities were able to accommodate them, but the letter eventually arrived March 24, 1942, at Bombay.

This is a scarce item. I have recorded approximately 30 surviving covers — pictured and described in philatelic literature, reported by specialist collectors, including myself, and viewed in exhibits — that were diverted from Pearl Harbor aboard Anzac Clipper during the Japanese attack.

The third cover was posted Feb. 21, 1942, at New York. It could have departed on a FAM 22 Capetown Clipper flight that departed Miami the next day, a flight that followed the prescribed route to the Belgian Congo but then continued eastward as a survey mission all the way to Diego Garcia in the Indian Ocean with fueling stops in East Africa.

The Bombay censor’s sealing tape and handstamped markings, and the arrival datestamp, attest that it did reach its intended destination, but unfortunately the date is illegible.

Later in 1942, this route, dubbed the Cannonball run, was further extended all the way to China by a perilous link that flew over the Himalayan “Hump,” which remained in service until November 1945. Regularly scheduled trans-Pacific civilian airmail flights were not restored until the fall of 1946.

As we begin our 75th anniversary tribute to the American participation, sacrifice, and heroism in World War II, postal history provides a tangible way to present it.