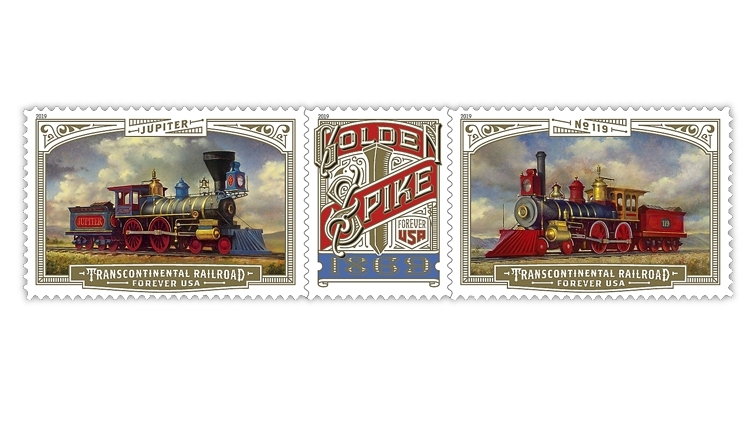 Three new commemorative forever stamps, to be issued May 10, celebrate the 150th anniversary of the completion of the first transcontinental railroad in 1869. The project made it possible to transport people and goods from one coast to another entirely by 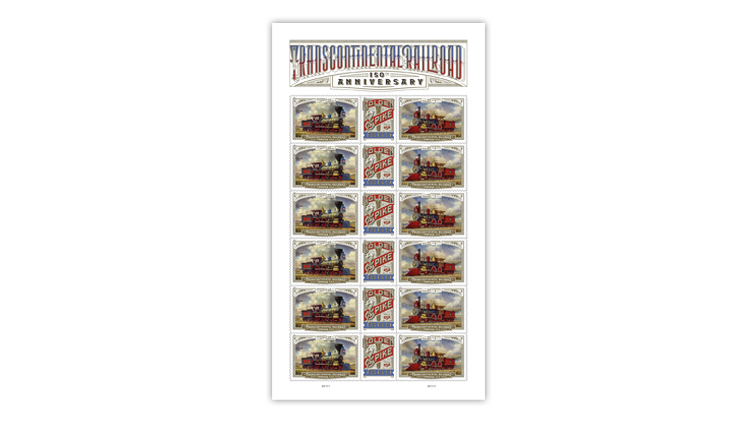 The Transcontinental Railroad stamps will be issued in panes of 15 with a decorative header. The May 10 issue date is the exact date of the anniversary. 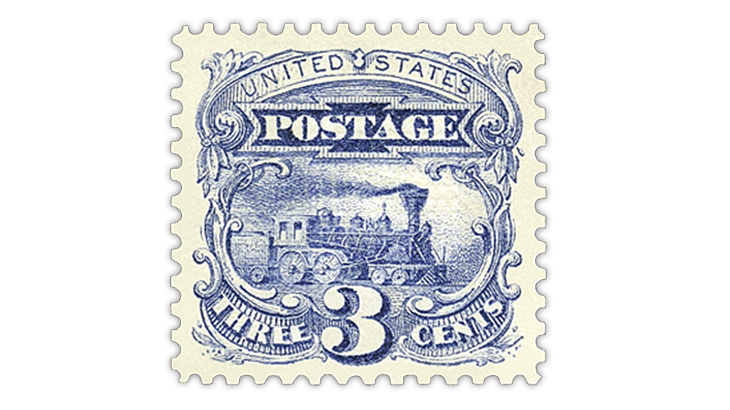 This 3¢ stamp issued March 19, 1869, was the first U.S. stamp to depict a locomotive. It was issued just weeks before the transcontinental railroad project was completed. 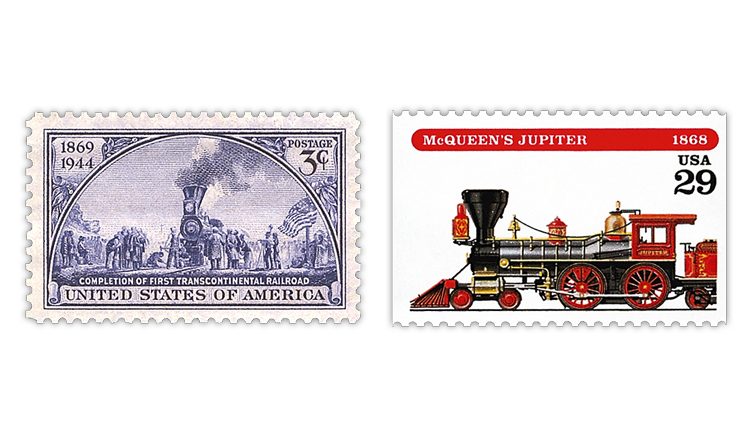 The Central Pacific locomotive Jupiter was featured on the 3¢ stamp celebrating the 75th anniversary of the transcontinental railroad in 1944. The locomotive also appeared as part of a booklet set of five 29¢ stamps in 1994. 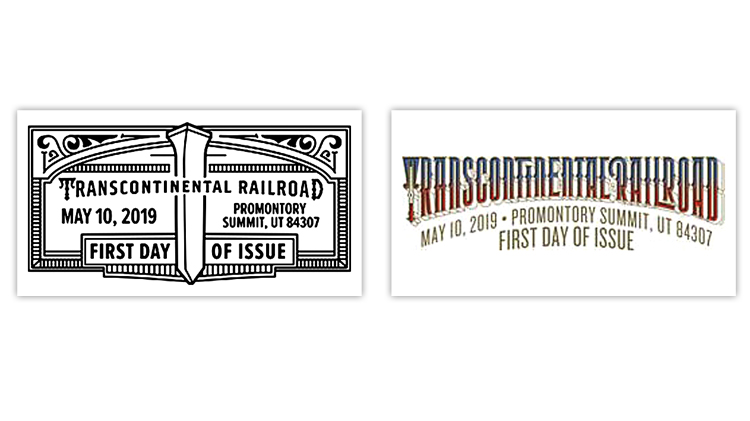 Two different postmarks have been prepared as first-day cancels for the Transcontinental Railroad stamp set. The black cancel depicts the golden spike, and the color cancel reproduces the stamp pane title text.
Previous
Next

To commemorate the 150th anniversary of the completion of the first transcontinental railroad, the United States Postal Service will issue a set of three forever stamps in a pane of 18.

The nondenominated (55¢) stamps will be issued May 10 in Promontory Summit, Utah, at the site where the Union Pacific and Central Pacific railroads connected exactly 150 years earlier, on May 10, 1869.

It was there that the ceremonial driving of a golden spike to join the two rail lines signaled the completion of a project to link America’s East and West coasts by rail.

Parking at the remote location requires the advance purchase of a $20 ticket from the Spike 150 Foundation website at www.spike150.org. In mid-April the foundation was reporting that all available tickets have been sold.

Those who have obtained advance tickets are advised to bring food and water, and cash for any potential purchases, since online charge card authorization might not be possible. Standard cell phone service may be limited or unavailable at the site as well.

The 3:30 p.m. (Mountain Time) ceremony will be hosted by Michael Mirides, USPS district manager for the Salt Lake City district. The Postal Service has asked that attendees register in advance at usps.com/transcontinentalrailroad.

The stamp set features an unusual combination of three stamps in two different sizes. On the pane, the three stamps are featured together in six horizontal rows.

At left and right on the pane are stamps showing the Central Pacific locomotive Jupiter and the Union Pacific’s No. 119, respectively, the two engines that met at Promontory Summit in 1869 when the rail link was completed.

In the center is a smaller stamp depicting the famed golden spike, with ornate lettering and flourishes surrounding it.

The illustrations were painted by Michael J. Deas and designed by USPS art director Greg Breeding, with typography and border treatments by Kevin Cantrell.

The memorial forever stamp honoring President George H.W. Bush that will be issued June 12 also features a portrait by Deas.

Along with the four process colors of cyan, magenta, yellow and black, the Postal Service notes that the stamps also include gold foil in the design.

"Building the transcontinental railroad during the 1860s was one of the great achievements of the era," according to the Postal Service. "The completion was marked by the ‘Golden Spike Ceremony,’ held on May 10, 1869, when rail lines built by the Central Pacific from the west and the Union Pacific from the east were joined at Promontory Summit in Utah.

"A large immigrant labor force — including a majority of Chinese and Irish laborers — carried out most of the backbreaking and often dangerous work that made the achievement possible.

"The workforce, totaling more than 20,000 at its peak, also included immigrants from many nations — Germany, Italy, Russia, Czechoslovakia, Poland and others — as well as African-Americans and former Civil War soldiers from both the Union and Confederate armies. Many crews of Mormon workers helped make the final push across Utah."

Completing a transcontinental railroad was a platform of the Republican Party and its 1860 presidential candidate, Abraham Lincoln.

"The new line would support communities and military outposts on the frontier," according to a historical perspective published by Union Pacific Railroad. "It would give settlers safe and dependable passage west. And most importantly, it would tie new states California and Oregon to the rest of the country."

The 1869 ceremony at Promontory Summit brought together officers and guests of the two train companies. The honor of driving the last spike went to Leland Stanford, the former California governor and president of Central Pacific Railroad.

The construction of the transcontinental railroad was a turning point in America’s development as a nation.

Travel time to cross the country was reduced from several months to about one week, spurring advances in the economy and the expansion of the American West.

The railroad also sped communication, as mail traveling cross-country by rail could reach a Western destination in record time.

On March 19, 1869, less than two months before the railroad was completed, the U.S. Post Office Department issued its first stamp featuring a train, part of the nation’s first pictorial stamp set.

The 3¢ ultramarine Locomotive stamp (Scott 114) depicts a train traveling from left to right. The locomotive bears some resemblance to the famous Jupiter steam locomotive that was at the 1869 golden spike ceremony, but it also shows differences in design.

Jupiter has been featured on American stamps prior to the release of the new anniversary set.

The 75th anniversary of the first transcontinental railroad was celebrated in 1944 with a 3¢ violet stamp reproducing the John McQuarrie painting Golden Spike Ceremony. The Jupiter is in the center of the vignette, which also shows Stanford standing in front of the train, sledgehammer in hand, and a crowd of people gathered around the scene.

The locomotive was also featured on a 29¢ stamp issued in 1994 (Scott 2844) as part of a Locomotives booklet set of five. The full color stamp design is captioned "McQueen’s Jupiter," paying tribute to the locomotive’s designer, Scottish-born Walter McQueen.

The 2007 Utah state quarter coin commemorates the driving of the last spike with a design bearing some similarities to the new stamp trio: the Jupiter at left, the No. 119 at right, and the golden spike enlarged between them.

The Postal Service has revealed two pictorial first-day cancels for the Transcontinental Railroad stamp set. The black cancel highlights the golden spike, centered in front of an ornate arched frame. The digital color postmark reproduces the colorful lettering "Transcontinental Railroad" that is printed across the top of the stamp pane.