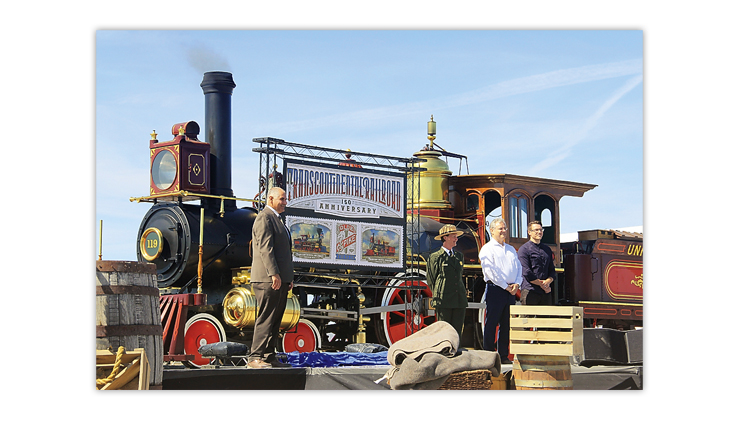 The United States Postal Service unveiled its three Transcontinental Railroad forever stamps May 10 at an afternoon ceremony at Promontory Summit, Utah. Pictured from left to right, with the No. 119 replica engine in the background, are Michael Mirides, U

Dedicated railroad enthusiasts turned out in full force for the celebration festivities of the 150th anniversary of the transcontinental railroad in Promontory Summit, Utah. According to newspaper reports, a crowd of approximately 20,000 people attended the May 10 event, and I believe it.

There were a lot of people in a relatively small space (the closest town was about 25 miles away by way of a two-lane road).

I think event organizers and even the United States Postal Service, which held a first-day ceremony for its three Transcontinental Railroad commemorative forever stamps, slightly underestimated the souvenir-seeking enthusiasm of railroad fans. The wait at the National Park Service booth’s checkout lines was about 30 minutes, and the line at the USPS booth ranged from 30 minutes to an hour fairly consistently the entire day.

By late afternoon, nearly all of their prints of the stamp designs were sold out, as were a couple of other products. Watching what people purchased was interesting. Many bought full panes of 18 stamps and then had the entire pane canceled with the first-day postmark.

The big surprise for the day was learning about a kit that contained imperforate proof-like panes of the different colors used to produce the stamps.