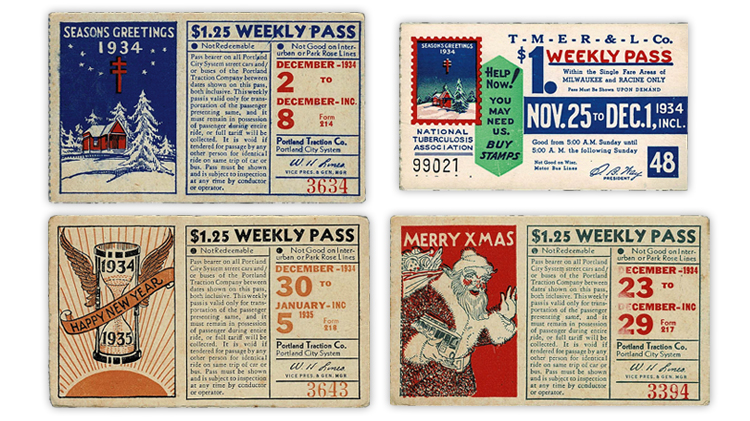 Transit passes such as these four 1934 examples were used to spread the word about the availability of Christmas seals or just to wish the holders happy holidays.

Transit passes like the top two shown here are one of the many branches of Christmas seal collecting.

These transit passes were part of the publicity program to encourage contributions to the National Tuberculosis Association and the use of Christmas seals. They were produced in 14 U.S. cities and are found from the years 1933 into the 1950s. Milwaukee also resurrected the practice from 1975 to 2001.

I collect Christmas seals of the years 1934 and 1935, and for those years, such transit passes are known from Chicago, Ill.; Milwaukee, Wis.; Portland, Ore.; and Rochester, N.Y.

The two 1934 examples at top in the illustration shown here are from the Portland Traction Co. and the Milwaukee Electric Railway and Light Company (TMER & L). Both show the design of the U.S. Christmas seal for that year.

But other transit passes from Portland that year, shown at the bottom of the illustration, wish the holder “Happy New Year 1934-1935” and “Merry XMas,” respectively.

Transit passes and other materials used to promote the sale of seals throughout the United States are regularly covered in the pages of Seal News, the quarterly all-color publication of the Christmas Seal and Charity Stamp Society.

If you have an interest in Christmas seal collecting, this group is a must to join for its publications and quarterly auctions. You can obtain a membership application by writing to Paul Clemmensen, membership chairman, 3879 Forester Court, San Jose, CA 95121, or by contacting him by email at paulclem@pacbell.net.

More information can be found on the society’s website.