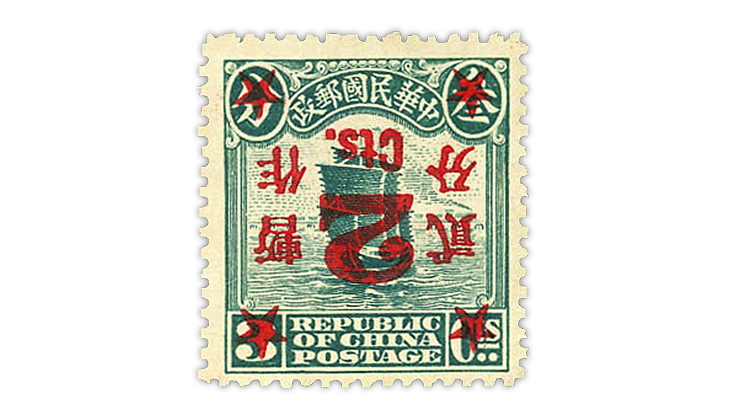 Described as one of the four “Treasures of the Republic,” this 1922 China rarity with inverted overprint will be auctioned by Kelleher and Rogers during its March 15-16 sale.

The upcoming Kelleher and Rogers auction taking place March 15-16 in Hong Kong includes a popular rarity often identified as one of the “Four Treasures of the Republic.”

The sale will be held at the Kelleher and Rogers offices at 35/F Central Plaza, 18 Harbour Road, Wan Chai.

China’s 3¢ blue green Junk stamp, originally issued in 1915 as part of the first Peking printing, was surcharged in red in 1922 to create the 2¢-on-3¢ stamp.

That modest provisional issue is known with a very desirable variety: the inverted surcharge (Scott 247a).

The example in the upcoming auction is described by Kelleher and Rogers as “a wonderfully fresh and nicely centered example which, while without gum, is absolutely sound, Very Fine, a splendid and desirable example of this great rarity …”

The value given for this rarity in the 2019 Scott Classic Specialized Catalogue of Stamps and Covers, 1840-1940, is $175,000, a figure printed in italics to identify the stamp as being difficult to value accurately.

The stamp in this sale is accompanied by a 2018 Experts and Consultants Ltd. photo certificate.

The second day of the two-day sale offers material from the Steven J. Berlin collection of Karl Lewis illustrated covers.

Born in Kentucky, Lewis settled in Yokohama in 1901. Many of his desirable handpainted covers are included in this extensive collection, including Lewis’ first recorded cacheted cover, and at least one previously undocumented cachet, according to Kelleher and Rogers.

Catalogs for the two auctions can be viewed at www.kelleherasia.com, with online bidding options available. For more information, send an email to stamps@kelleherasia.com.