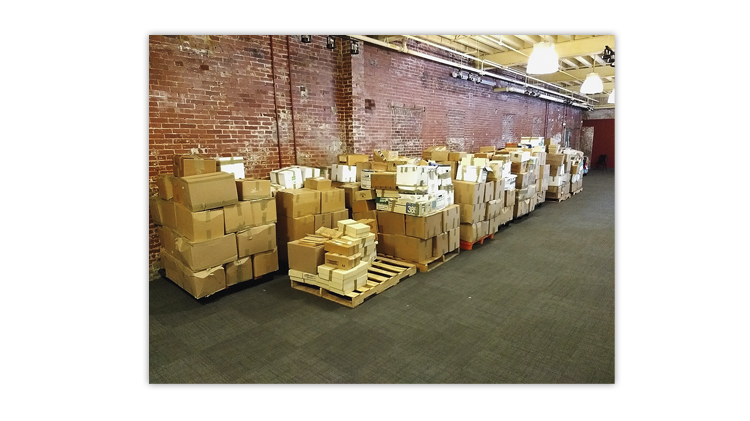 Philatelic historian Herbert A. Trenchard has donated his research collection of auction catalogs and stamp hobby history to the American Philatelic Research Library in Bellefonte, Pa. APRL director of information services Scott Tiffney estimates that the

Herbert A. Trenchard, who has researched and documented the history of the stamp hobby for several decades, has donated his collected material to the American Philatelic Research Library in Bellefonte, Pa.

The donation includes many thousands of philatelic auction catalogs, but as APRL librarian and director of information services Scott Tiffney recently described it, it also comprises “material related to philatelic exhibitions, famous collectors and their collections, early philatelic history in America, U.S. locals, forgers and forgeries, early philatelists who impacted U.S. philately, first-day ceremonies, the Famous Americans issue of 1940, the St. Louis Bears, the Ionian Islands and the history of the American Philatelic Society.”

The Trenchard collection donated to the APRL was delivered by truck packed in boxes and stored on 24 pallets.

“On behalf of the APS and APRL, we would like to sincerely thank both Dr. Trenchard and his daughter Abby for making the transfer of this extraordinary collection possible,” Tiffney wrote shortly after the material arrived in early March.

The history of the stamp hobby is far more extensive and complex than one might consider at first glance.

It is apparent that one individual was the first to collect postage stamps after Great Britain’s famous Penny Black of 1840 was the first stamp to appear, and that other collectors soon followed.

But in those early years there was little effort made to document who was selling stamps to collectors, which auction houses opened up (and later closed), how various stamp clubs and organizations were formed and grew, and so on.

Over the course of the hobby’s history, a number of collectors have looked back to research and record that history, tracking its origins and following the many extended pathways that the stamp hobby and its adherents have traveled.

Trenchard, a retired theoretical physicist, has been chief among those researchers for many years, following his interest in how the stamp hobby’s past has shaped its present.

Over the years that he has been researching and documenting the history of the hobby, Trenchard amassed a very large collection of material that he actively sought out. His library began with the stamp auction catalogs he began collecting in the 1940s, and he added to it accumulations of other material that document the history of the hobby that extends so broadly around the world.

He has been quoted as saying that these substantial holdings include “anything connected with stamp collecting except stamps.”

Smaller segments of his collection have been auctioned in recent years, other items have been donated to the library in the past, but the bulk of it is now in the hands of the APRL.

In a report to the library board of trustees in March, Tiffney said that a rough estimate of the collection suggests it contains some 125,000 items.

The library is also especially interested in material from the collection that documents the history of the library and the American Philatelic Society.

The library is closely associated with the APS, where Trenchard is a life member and once served, as one might guess, as the group’s historian. He also completed multiple terms as an APRL trustee and officer of the library.

Betsy Gamble, who retired last year from her technical services position with the library, has returned as a part-time employee to assist with taking inventory of the massive donation.

“Betsy’s going to be identifying material we need for archival storage and preservation,” Tiffney explained.

A large number of dealer covers are included in the collection. Tiffney described them as representing every known stamp dealer from roughly 1900 to 1970 and totaling about 7,500 covers organized alphabetically by dealer name.

He expects that this collection will be useful to respond to questions the library regularly receives about lesser known dealers of the past.

Along with his allegiance to the APS and APRL, Trenchard is also a former member of the Council of Philatelists, an advisory group of the National Postal Museum. Council members are appointed by the Smithsonian board of regents.

The library and the museum together might be the two most important custodians of philatelic history in the world.

In 2006, the Smithsonian recognized Trenchard with its prestigious Philatelic Achievement award, describing him as the “dean of philatelic history” and acknowledging the many articles he has written on the subject.

But his contributions to the stamp hobby have gone far beyond his published research. He has compiled bibliographies of museum holdings. He helped to organize and understand papers and holdings left by past philatelic researchers. He has served as a consultant on museum exhibitions, and much more.

The United States Philatelic Classics Society has recognized Trenchard’s many contributions, bestowing upon him the Distinguished Philatelist award in 2003. He also received the John Luff award in 1992 for outstanding service to the APS, and was elected to the APS Writers’ Unit hall of fame in 1998.

On the APS website, Tiffney has been documenting the progress as the donation is examined and organized. He has written about the stamp dealer cover collection, and also about stamps and labels in the donation that document worldwide stamp exhibits through history.

“Dr. Trenchard’s collection is a treasure trove of the special issues that were created for many of the earliest international and notable European philatelic exhibitions of the late 1800’s and early 1900’s,” Tiffney wrote.

Tiffney anticipates that going through the material and properly inventorying it will take several months.

“It’s going to be an invaluable resource for growing our collection, particularly our auction catalog collection, as well as some really unique items we’re going to keep in our archives,” he told the library board.