Trio of PRC rarities in June 29 Kelleher and Rogers auction 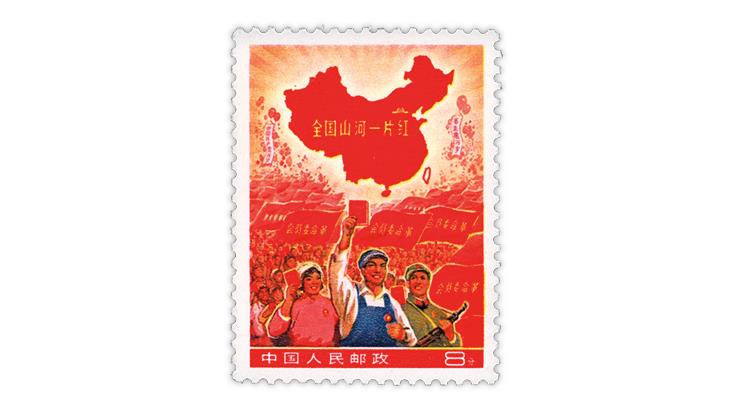 One of three select rarities of the People’s Republic of China to be offered June 29 by Kelleher and Rogers is a sound, mint, never-hinged example of the iconic 1968 8-fen The Entire Nation is Red stamp. Most surviving examples of this rare stamp have bee 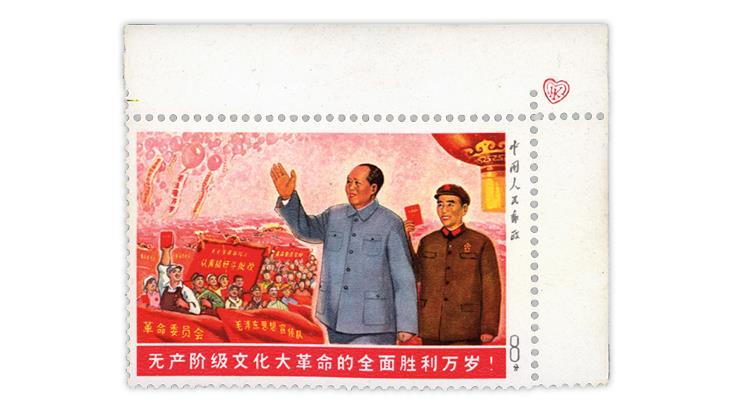 A mint, never-hinged top right margin single of the unissued 1968 8f Great Victory of the Cultural Revolution stamp picturing Chairman Mao and Lin Bin Piao is also up for bids in the Kelleher and Rogers auction. Although not listed, the stamp is pictured 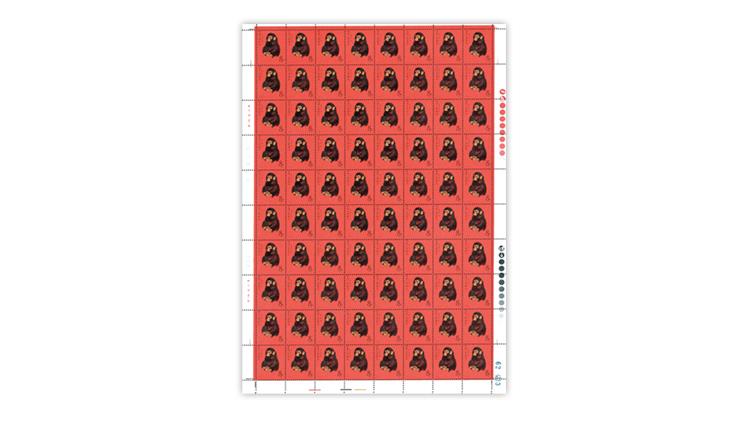 An intact mint, never-hinged sheet of 80 of the well-known 1980 8f Year of the Monkey stamp is the third People’s Republic of China rarity to be offered in the sale. With fewer than 5 million issued, most examples of this stamp were sold in limited quanti
Previous
Next

Kelleher and Rogers Ltd., a division of Daniel F. Kelleher Auctions, will conduct a June 29 sale of three select rarities of the People’s Republic of China. The auction will take place at the Kelleher gallery in Danbury, Conn.

In the introduction to the sale catalog, Kelleher and Rogers place this important trio of stamps in historical context.

“The three stamps offered here are not only treasured by collectors, but also stand out as important cultural icons of modern China, embodying its sociopolitical history and mirroring its economic development,” Kelleher and Rogers said.

“As such, they rank among the most famous and desirable philatelic items of the modern era, as well as the most precious in monetary terms.”

Because of the scarcity of these stamps, Kelleher and Rogers is requiring advance deposits from bidders who participate in the sale.

“To participate in bidding in this sale, we require a deposit by bank transfer equal to 50% of the low estimate as published herein [in the auction catalog],” Kelleher and Rogers said.

“Deposit must be received 48 hours prior to sale. Balance due to successful bidders must be paid upon receipt of invoice at the close of the sale.”

Up for bids first is a mint, never-hinged example of the 1968 8-fen stamp picturing a map of China and a worker, farmer and soldier (Scott 999A). The map is inscribed “the entire nation is red” in Chinese.

According to Kelleher and Rogers, “Upon the stamp’s issue on 25 November 1968, errors in the map were discovered by an editor of the SinoMaps Press — the omission of the Archipelagos of Xisha and Nanshi, and errors in the borders with other countries — and these were given as the official reason for the stamp’s immediate withdrawal from sale and the return of all unsold examples from post offices. Not mentioned was that the map of Taiwan appeared in white, apparently the accepted real reason.”

The Scott Standard Postage Stamp Catalogue values the stamp in unused condition at $135,000 and notes that it is “most often found repaired. Values are for sound, unrepaired examples.”

The example in the Kelleher and Rogers sale is exceptional because of its superb condition and never-hinged gum.

The image of the two men “appearing at a Victory celebration in the countryside takes up one of Mao’s favorite themes, the importance of the rural areas to the detriment of the urban, with the forced migration of young intellectuals and members of the Red Guards from the cities under the ‘Down the Countryside Movement,’” Kelleher and Rogers said.

Although not listed, the stamp is pictured and valued at $300,000 in the Scott Standard catalog.

Many collectors around the world are familiar with the 1980 8f Year of the Monkey stamp (Scott 1586). Although fewer than 5 million were printed, Kelleher and Rogers’ offering is decidedly uncommon: an intact unfolded sheet of 80 with never-hinged gum.

Kelleher and Rogers draws attention to an “insignificant thumbnail crease” in the selvage margin at top right, noting that it is “mentioned strictly for accuracy.”

Most examples of this famous stamp were sold in limited quantities at post offices in China or to collectors of new issues living abroad, Kelleher and Rogers said.

According to Kelleher, the 1980 Year of the Monkey stamp “was the first in the cycle of twelve Chinese Zodiac New Year stamps issued between 1980 and 1991.”

“Designed by famed contemporary artist Huang Yongyu and [stamp designer] Shao Bolin, this whimsical monkey was transformed into the issued stamp through photogravure and recess printing,” Kelleher and Roger said.

“Huang’s celebrated original stamp design proved so popular that he was asked to design the 2016 Year of the Monkey stamp at the age of 92.”

Kelleher has prepared a single catalog for the sale of these three rarities from the People’s Republic of China that is available for viewing and download on the firm’s website, with online bidding options available on Stamp Auction Network.