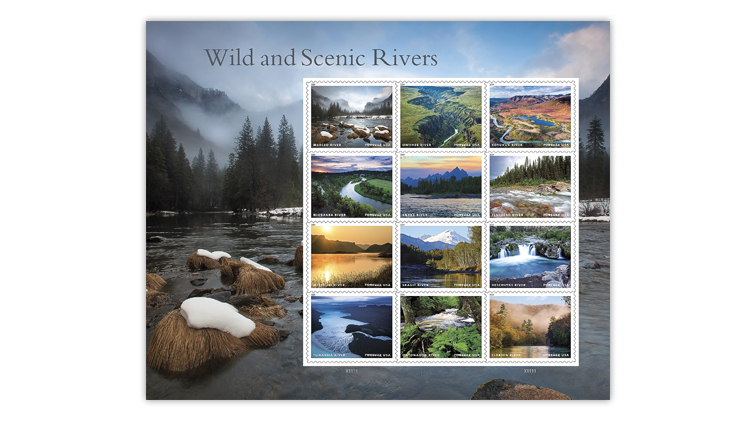 The pane of 12 Wild and Scenic Rivers commemorative stamps will be issued May 21 with an 11 a.m. first-day ceremony at Tumalo State Park in Bend, Ore.

Twelve United States stamps featuring photographs of natural river scenes will be issued May 21 in a pane of 12.

The park is located along the Deschutes River, which is pictured on one of the 12 stamps.

Joe Corbett, USPS chief financial officer and executive vice president, will host the event, which is free and open to the public.

Melford’s work has appeared in National Geographic and other publications, and his photograph of Glacier National Park in Montana can be seen on the 85¢ Scenic American Landscapes airmail stamp issued in 2012 (Scott C149).

Palmer is a photographer who also has authored several books, including America’s Great River Journeys and Field Guide to Oregon Rivers.

Wick is a photographer for the U.S. Department of the Interior’s Bureau of Land Management.

The theme of the stamp set celebrates the Wild and Scenic Rivers Act signed into law by President Lyndon B. Johnson in 1968.

The Act designated for preservation “certain selected rivers of the Nation which, with their immediate environments, possess outstandingly remarkable scenic, recreational, geologic, fish and wildlife, historic, cultural or other similar values, shall be preserved in free-flowing condition.”

The Act today protects more than 12,700 miles of rivers and streams, according to the U.S. Forest Service, one of several agencies involved in preservation efforts.

The selvage on the 12-stamp pane shows a larger image of Melford’s Merced River photograph that appears on the first stamp in the pane. The issue title, “Wild and Scenic Rivers,” is lettered near the top of the pane, positioned to the left.

The name of the river pictured on each stamp is inscribed in the lower left corner of that stamp, with “FOREVER” and USA” at lower right on each stamp.

The stamps are offset printed by Banknote Corporation of America, in a print run of 60 million.

As of late April, the Postal Service had not published advance images of first-day cancels for the Wild and Scenic Rivers issue.

Technical details and first-day cancel ordering information for the Wild and Scenic Rivers commemorative stamps can be found in the box on this page.