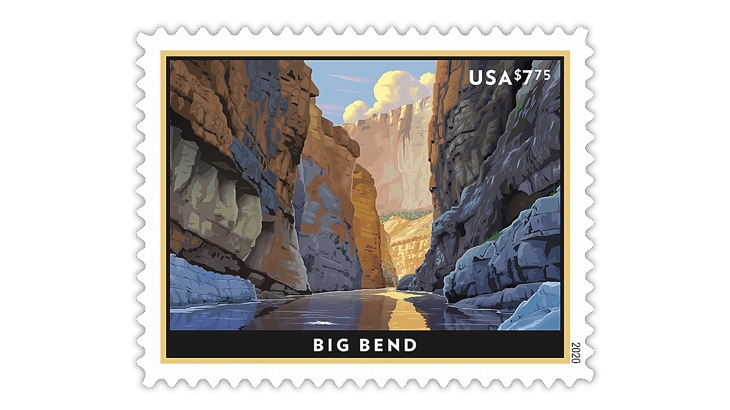 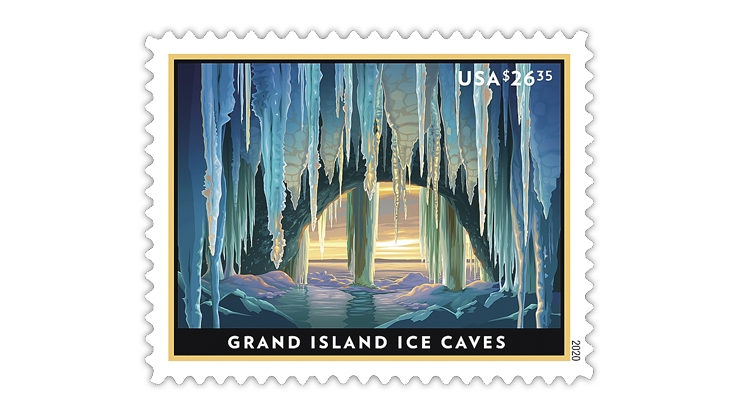 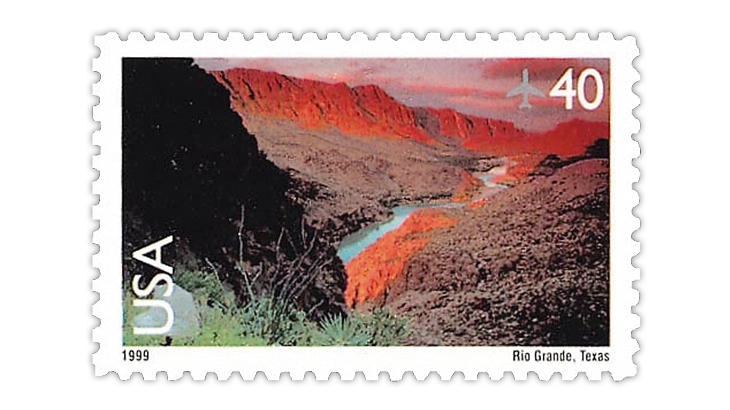 The 1999 40¢ Rio Grande stamp shows a different view of the river that forms a natural border between Texas and Mexico. 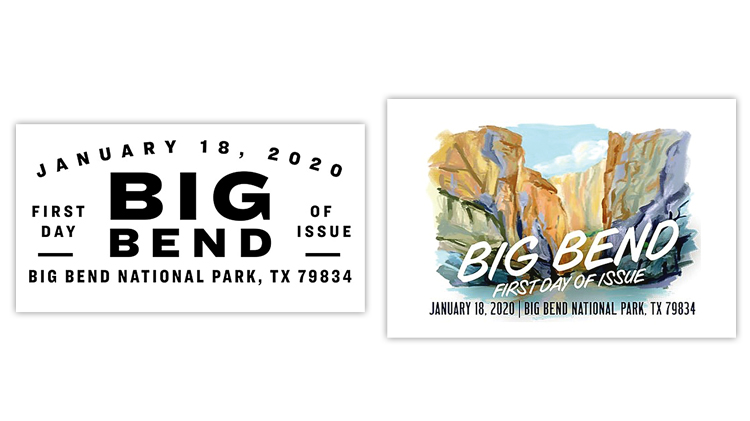 Two first-day cancels for the Big Bend stamp include the location of Big Bend National Park, Texas. The color postmark reproduces a scene similar to the view on the stamp. 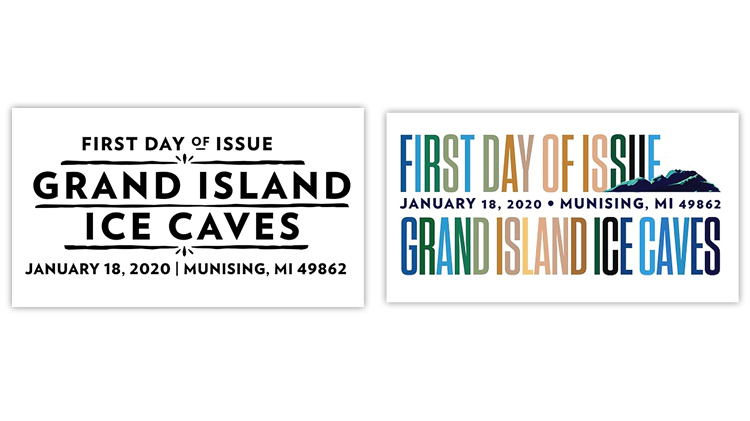 These two first-day cancels for the Grand Island Ice Caves stamp are from Munising, Mich. The Lake Superior island is about one-half mile from Munising in the state’s Upper Peninsula.
Previous
Next

The United States Postal Service recently finalized the scheduled postage rate changes that will take place Jan. 26. These changes will not affect the cost of domestic first-class letter mail, but they will increase postage rates for expedited mail, including the flat-rate envelopes used for Priority Mail and Priority Mail Express.

As a result, two new postage stamps and one stamped envelope will be issued Jan. 18.

One stamped envelope for Priority Mail is also expected on Jan. 18, but details for this item have not been announced by the Postal Service.

Based on similar issues from past years, it is expected that the 9½-inch by 12½-inch stamped envelope will display the $7.75 Big Bend stamp design as an imprinted stamp.

Details for the stamped envelope will be published by Linn’s when they become available.

Ashton Potter USA printed the two postage stamps by four-color offset lithography in panes of four. The two issues are not printed on the same offset press, but each will have microprinted text within the design, according to technical details provided by the Postal Service, and the stamp sizes and pane sizes are the same.

This is the fifth consecutive year that has seen January increases in the two U.S. expedited mail rates and the corresponding issuance of two new postage stamps to fulfill those new rates. Since 2016, the cost of Priority Mail flat-rate service has increased by $1.30, and the flat rate for Priority Mail Express has increased by $3.40.

The new stamps are part of the ongoing American Landmarks series of high-denomination stamps. The series began in 2008 with two stamps commemorating Mount Rushmore and the Hoover Dam (Scott 4268-4269).

Chicago-based artist Dan Cosgrove has created the poster-style illustrations for each stamp in the series, including the 2020 issues.

The American Landmarks series depicts some of the country’s more famous locations, including the Old Faithful geyser in Yellowstone National Park, the USS Arizona Memorial in Hawaii, and the stately Gateway Arch in St. Louis, Mo., and others that are lesser known.

The new stamps are the 23rd and 24th in the series.

Cosgrove also illustrated a nondenominated (55¢) forever stamp issued June 11, 2019, to mark the 75th anniversary of the commissioning of the USS Missouri (Scott 5392).

A native of Cincinnati, Ohio, Cosgrove specializes in illustration and design, according to his website, and his work has appeared “in numerous ads, posters, packages, stamps, annual reports and on the Internet.”

According to the Postal Service, “There will be no national first-day-of-issue ceremony for these stamps.” It remains possible, however, that one or both of the corresponding post offices will hold a local event on the issue date.

The $7.75 Big Bend stamp illustration depicts a water-level view of the Rio Grande in West Texas, where it flows between the sheer limestone cliffs of Santa Elena Canyon in Big Bend National Park.

The stamp “celebrates the beauty of the Big Bend region in West Texas, where river, mountain, and desert ecosystems coexist in its vast expanses,” according to the Postal Service.

The Rio Grande, which forms a natural border between Texas and Mexico, was also featured on a 40¢ airmail stamp in 1999 (Scott C134) as part of the Scenic American Landscapes series. The photograph by Bruce Dale shown on the earlier stamp was taken from Big Bend Ranch State Park, which is just west of Big Bend National Park.

The new Priority Mail Express stamp features Cosgrove’s rendition of the ice caves that are part of the massive sandstone bluffs on Grand Island in Lake Superior.

“Impressive in any season, the bluffs are especially dramatic in winter when lake water seeps into the crevices and caverns, forming magnificent ice curtains and icicles that hang like stalactites from ceilings,” according to the Postal Service.

“The stamp art features a colorful illustration of how one of these ever-changing ice caves might appear from the inside looking out toward the west at sunset.”

The illustration was developed first as a pencil sketch. Cosgrove then finished the stamp art digitally.

As a welcome change, the first-day covers for these two new stamps offered by the Postal Service will feature postmarks that include a location relevant to the stamp subject: Big Bend National Park in Texas, and Munising, Mich.

Several previous issues in the series have sported first-day postmarks from Kansas City, Mo., the location of the USPS Stamp Fulfillment Services facility, despite the fact that the stamps illustrate scenes in California, New York and other locations around the country.