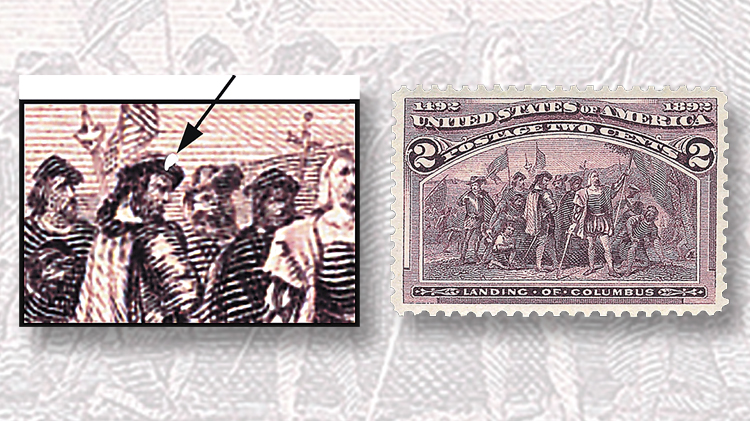 The “Broken Hat” variety of the United States 2¢ Landing of Columbus (Scott 231) is in demand and undervalued in both unused original gum condition and mint never-hinged condition. Look for examples with clear breaks in the hat.

The 1893 Columbian Exposition issue is truly one of the great classic issues of United States stamp collecting. Prices for stamps in the issue range from affordable by most to very expensive for the dollar-denominated stamps. For the well-heeled collector, there is also great scope for specialization in the issue.

One of the more affordable varieties that is in more or less constant demand is the “Broken Hat” variety of the 2¢ Landing of Columbus (Scott 231). The flaw produces a break in the hat of the third figure to the left of Columbus in the stamp design.

The Scott U.S. Specialized catalog notes: “There are a number of different versions of the broken hat variety, some of which may be progressive.” When buying, look for an example with a clear break in the hat. Avoid those with very slight breaks.