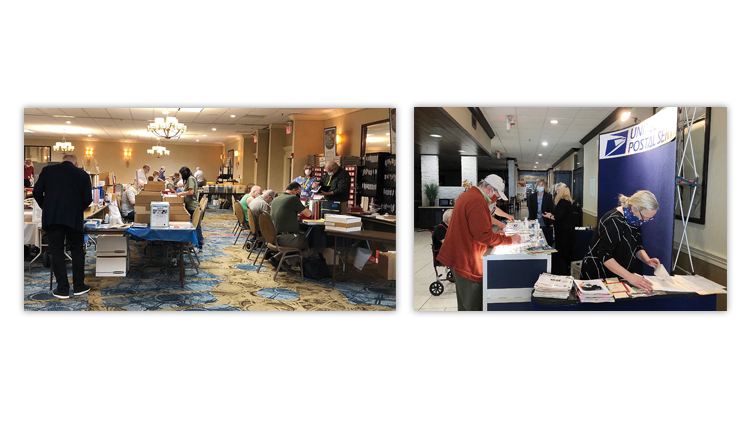 The dealer bourse and the United States Postal Service’s booth at the Garfield-Perry Stamp Club’s March Party stamp show held April 9-11 near Cleveland, Ohio. The Postal Service booth was located in the lobby of the hotel at the entrance to the show. Phot

The national stamp show scene returned to a slow start in March and early April. I attended both the St. Louis Stamp Expo show (March 19-21) and the March Party show of the Garfield-Perry Stamp Club near Cleveland, Ohio (April 9-11).

The two experiences shared similarities but also had differences. Some of the differences hinged directly on local government health guidance rules.

In St. Louis, a person greeted you near the entrance to take your temperature and hand you a color sticker to indicate that you were checked that day. You then walked to a nearby table to fill out a COVID-19 waiver of liability. The form had three spots to initial, plus you had to sign it and provide contact information in case they needed to get in touch with you after the show.

I expected the same scenario at the Cleveland show because of information in press releases about the event, but this did not happen. Show organizers indicated that new guidance from the office of the governor of Ohio changed what they were required to do.

Each stamp show had approximately 30 dealers, and the tables were spread out to accommodate social distancing. In Cleveland, a certain number of chairs were allotted per dealer table. If all the chairs were filled, a potential customer had to move on and come back later.

Mask-wearing was required by both venues per hotel and local guidance. It was enforced more in St. Louis than in Cleveland.

Attendance was stronger in Cleveland. Some of that could be a direct result of the vaccine rollout across the country.

The mood at both shows was positive. I can best describe the feeling as comparable to that of attending a family reunion where everyone was talking about their vaccinations. Oh, and stamps were being sold, too.

Sales seemed brisk. A number of collectors were overheard talking about stimulus payments they had received and that was fueling some higher than normal spending.

The United States Postal Service did not have a booth at the St. Louis show, but it did at the Cleveland show. In fact, that was the first USPS participation in a national-level stamp show since that same show in March 2020.

The next national-level show set to take place is the Minnesota Stamp Expo July 16-18 in a Minneapolis suburb, followed by Westpex July 30-Aug. 1 in the San Francisco area. And after that is the Great American Stamp Show Aug. 12-15 in Rosemont, Ill. (as long as 75 dealers sign up to participate by mid-May).

In the fall, the show calendar might start getting crowded. A number of national shows originally scheduled to be held earlier this year have moved to the end of the year.

Perhaps there is a light at the end of the tunnel.