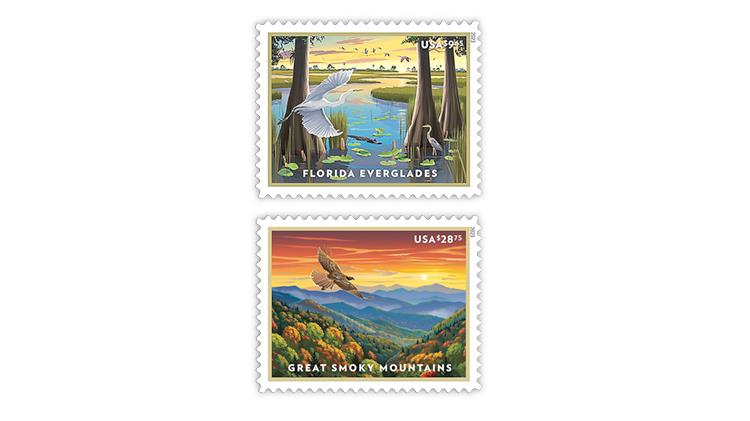 Two new United States American Landmarks stamps for expedited mail will be issued Jan. 22. The $9.65 stamp pictures a scene from the Florida Everglades and a view of the Great Smoky Mountains in North Carolina and Tennessee is shown on the $28.75 stamp. 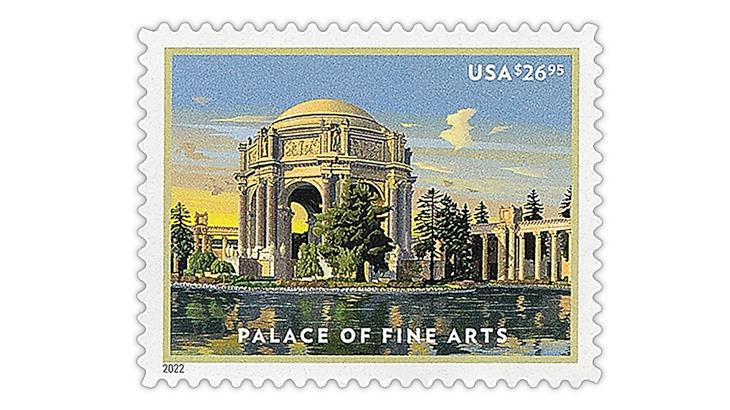 Prior to the issuance of the $28.75 Great Smoky Mountains stamp, the 2020 $26.95 Palace of Fine Arts stamp had the highest face value of any regular postage stamp issued by the United States.
Previous
Next

The United States Postal Service will issue two new high-denomination stamps for expedited mail service on Jan. 22. The stamps are in response to new postage rates that went into effect on that day.

According to the Postal Service, the $9.65 stamp features “a sawgrass marsh as seen at sunset from the edge of a cypress dome.”

“In the foreground, a stand of mature bald cypress trees shelters a great egret in flight while a great blue heron patiently awaits its prey. In the background, the marsh meanders toward the horizon, dotted with tree islands, as roseate spoonbills and other waterbirds fly overhead.”

The artwork for the $28.75 stamp “captures an iconic mountain scene located near Newfound Gap between Gatlinburg, TN, and Cherokee, NC,” the USPS said. A red-tailed hawk in the foreground soars over the landscape below.

When the Postal Service first revealed the design of the Great Smoky Mountains stamp, it showed a $26.95 denomination. That image was included among the designs of other U.S. 2023 issues that were shown for the first time in the Nov. 14, 2022, issue of Linn’s Stamp News.

The design of the $9.65 Florida Everglades was revealed in a page 1 story in the Jan. 2 Linn’s announcing additional stamps in the Postal Service’s 2023 stamp program.

The $9.65 Priority Mail stamp is the third in the series to picture a Florida landmark, while the $28.75 stamp for Priority Mail Express service is the first to highlight a landmark in North Carolina and Tennessee.

The $28.75 Great Smoky Mountains stamp will have the highest face value of any regular postage stamp issued by the United States. It claims that title from the $26.95 Palace of Fine Arts stamp issued Feb. 14, 2022 (Scott 5667).

This is the eighth consecutive year that has seen January increases in one or both of the U.S. expedited mail rates and the corresponding issuance of new postage stamps to fulfill those rates.

Since 2016, the cost of Priority Mail flat-rate service has increased by $3.20, and the flat rate for Priority Mail Express has jumped by $5.80.

Chicago-based artist Dan Cosgrove has created the poster-style illustrations for all the stamps in the American Landmarks series, including the 2023 issues. His palette of bright colors adds a vibrancy to the stamps’ designs adding to their visual appeal.