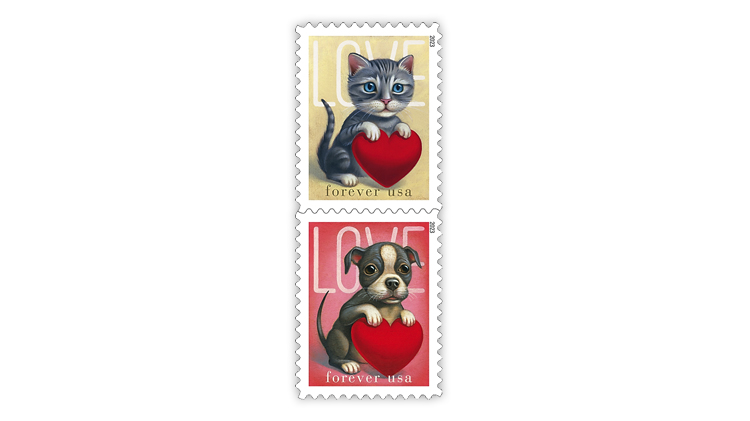 One of the two new Love stamps features a kitten, and the other features a puppy. Both animals are resting their paws on a large red heart, and the word “love” appears in capital letters behind each animal.

A first-day ceremony for the stamps will be held in Austin, Texas, at Austin Pets Alive!, an animal shelter that implements “innovative lifesaving programs designed to save the animals most at risk of euthanasia,” according to the organization’s website.

The U.S. Postal Service said that the majority of the dogs and cats at the Austin facility were once on the euthanasia lists at other shelters and that the nonprofit organization recently celebrated its 100,000th rescue.

Austin Pets Alive! has approximately 350 animals available for adoption and 1,100 in foster care, according to the USPS.

Anyone interested in attending the first-day ceremony is encouraged to register with the USPS online.

The inclusion of conventional pets on Love stamps shows a deviation from the common images, such as hearts and flowers, that the Postal Service uses in the popular Love series.

One stamp in the series, the 1986 issue (Scott 2202), shows an illustration of a dog, but depictions of animals have otherwise been limited to birds on multiple issues and one stamp showing a butterfly (Scott 4534).

Buzelli originally painted the stamp design with oils on wood panels, according to the Postal Service. To create the final pieces, the designs were then scanned and edited digitally, the Postal Service said. Art director Ethel Kessler is credited with designing the stamps.