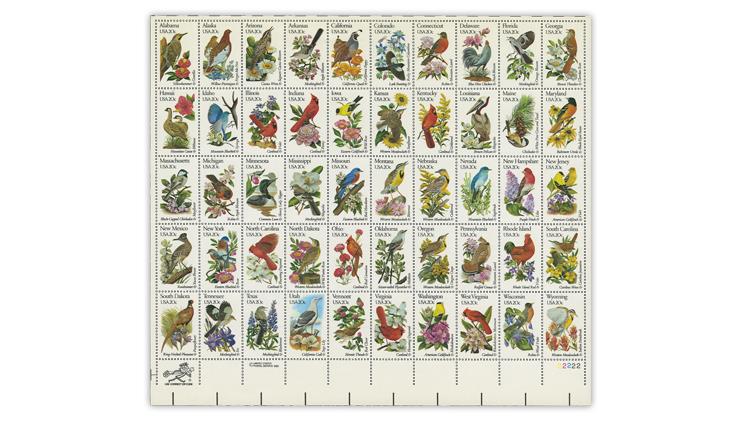 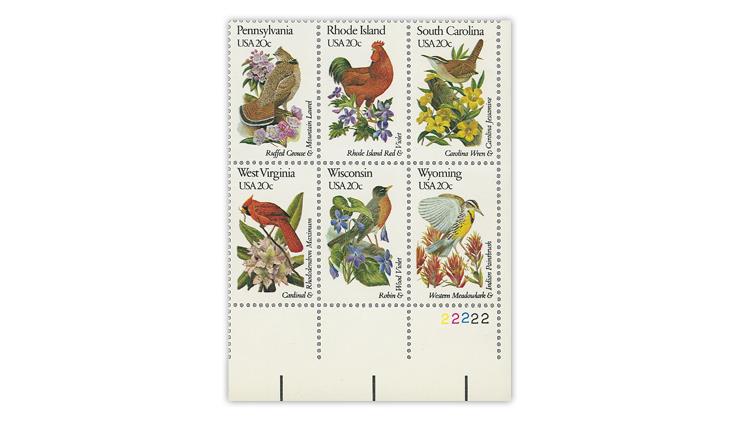 Figure 2. This lower right corner block of six is from a pane of 1982 State Birds and Flowers perforated by the in-line perforator in a single operation resulting in perfect single hole corners. 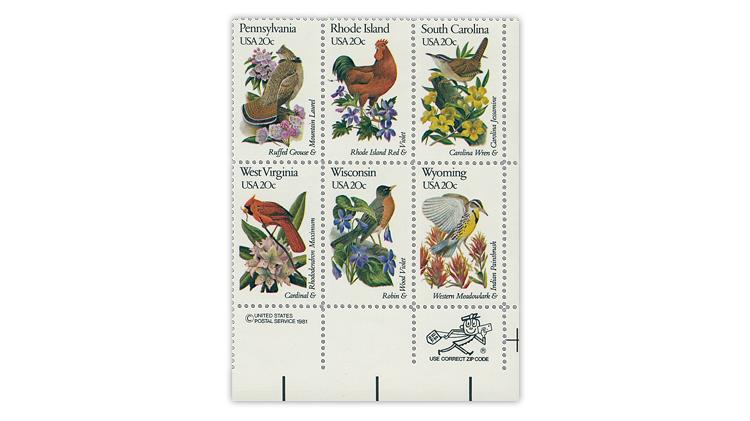 Figure 3. This block shows the second method used to perforate the 1982 States Birds and Flowers stamps, an off-line perforator that applied perforations in one direction and then the other, such that the lines crossed each other at the corners as can be
Previous
Next

One of the most popular 50-stamp panes released by the United States Postal Service is the 1982 20¢ State Birds and Flowers issue shown in Figure 1. In addition to being beautiful with well-designed colorful subjects, it is also interesting philatelically for two reasons.

One is the cataloged differences in the way perforations were applied. The other is the different fluorescent characteristics from pane to pane, which do not receive catalog recognition.

Looking first at the perforations, notice that the perfs are perfect on the block of six stamps shown in Figure 2, graphically cropped from the lower right of the pane in Figure 1. These perforations meet perfectly at the corners of each stamp and do not extend into the narrow selvage margins of the pane.

These are the so-called “bull’s-eye perfs” struck in one impression of an in-line perforator on press at the end of the printing operation. Compare them the perforations on the block of six shown in Figure 3, where the perforations overlap each other at the corners because they were applied by an offline electric-eye perforator that did them in one direction and then the other. In this case, the perforations do extend into all margins.

As I understand it, the Bureau of Engraving and Printing started production using the in-line perforator, but it broke down during production and the older backup electric-eye perforator was pressed into service.

The matter of fluorescence is not as well known because it is not addressed in the Scott U.S. Specialized catalog, but I recently came across a 1990 letter from the BEP that explains it.

He asked the BEP to confirm his finding and to explain why there was a difference. Here is the important part of the BEP’s response:

“The Birds and Flowers stamps were printed by the gravure process on paper which was supplied by one paper manufacturer. The paper used for this printing required high brightness and a smooth surface. The smooth surface was achieved by coating the paper with fine particles of calcium carbonate.

“The paper, as evaluated prior to purchase, was found to have levels of fluorescence which could possibly present a problem to USPS mail processing equipment. The USPS subsequently evaluated the paper and stamps printed on the paper and found that the fluorescence levels would not present a problem to mail processing equipment. Therefore, the Bureau of Engraving and Printing was given authority to proceed with procurement of this paper. Your observation is an example of varying levels of fluorescence which is the result of the paper manufacturer’s fluctuation.”

I have looked at about 40 panes under ultraviolet light. Only one pane lacked fluorescence. The others exhibited a wide range of brightness from very light to very bright. For those interested in such varieties, this confirms something else to look for. Maybe one day Scott will list them.

Bureau of Engraving letters are an excellent resource to use in explaining production varieties on issued stamps. Over the years, I have accumulated a file of these letters, and recently made them available to the Errors, Freaks and Oddities Collectors Club.

The club’s vice president and webmaster Cemil Betanov has scanned the letters and is working on a project to index them and make them available on its website.

If any Linn’s reader has a Bureau letter that might be added to this resource, please contact me at jmhstamp@verizon.net.

For more information about the Errors, Freaks and Oddities Collectors Club, visit its website.