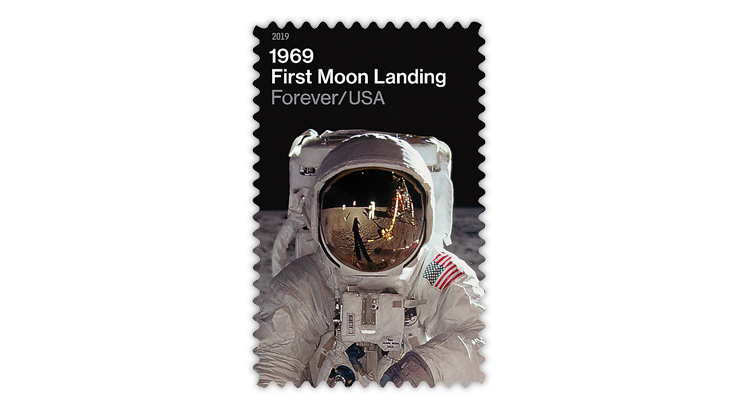 Two forever stamps will be issued to celebrate the 1969 manned moon landing by the crew of Apollo 11. The issue date has not been announced. 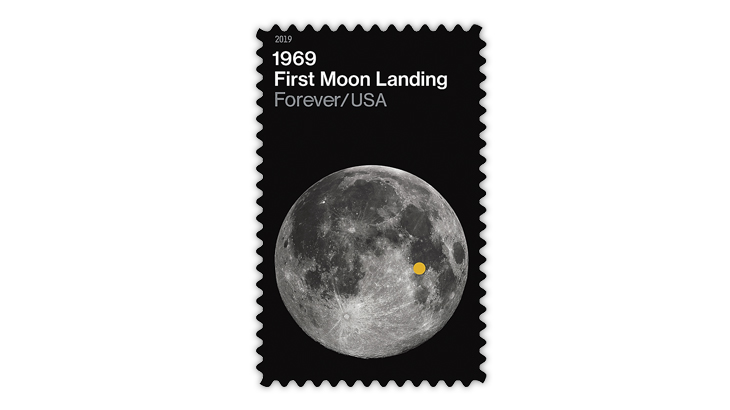 One of the two Moon Landing stamps pictures astronaut Buzz Aldrin in a photograph taken by Neil Armstrong. The other shows the location of the moon landing, in the Sea of Tranquility.
Previous
Next

No issue date or location was announced for the nondenominated (55¢) stamps. The format in which the stamps will be issued also was not revealed.

“One stamp features a photograph of Apollo 11 astronaut Buzz Aldrin in his spacesuit on the surface of the moon,” the Postal Service stated in a March 13 press release. “The image was taken by astronaut Neil Armstrong.

“The other stamp, a photograph of the moon taken in 2010 by Gregory H. Revera of Huntsville, Ala., shows the landing site of the lunar module in the Sea of Tranquility. The site is indicated on the stamp by a dot. The selvage includes an image of the lunar module.”

On July 21, 1969, Armstrong and Aldrin became the first humans to set foot on the moon after the Apollo 11 lunar landing module Eagle carried them to the surface from the orbiting command module Columbia, piloted by Michael Collins.

The historic event was broadcast live on televisions around the world. The three astronauts returned to Earth safely three days later, on July 24.

While numerous living individuals have been depicted on U.S. stamps, the stamp picturing Aldrin is unusual in that its still-living subject was acknowledged and named by the Postal Service.

The current USPS stamp subject selection criteria says that “Living people will not be considered at the present time.”

Armstrong, the photographer, can be seen on the stamp in the reflection on the visor of Aldrin’s helmet.

Aldrin celebrated his 89th birthday in January. Michael Collins will turn 89 in October.