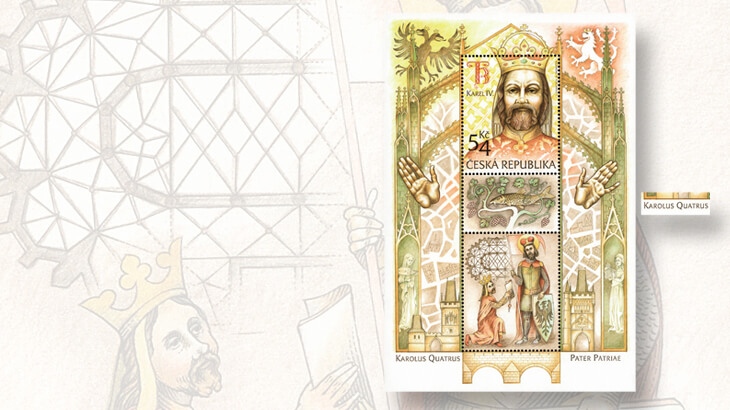 The Czech Republic issued a souvenir sheet May 4 to honor Charles IV on his 700th birth anniversary. However, in the inscription in the lower left “quartus” (Latin for “fourth”) was misspelled “quatrus.” 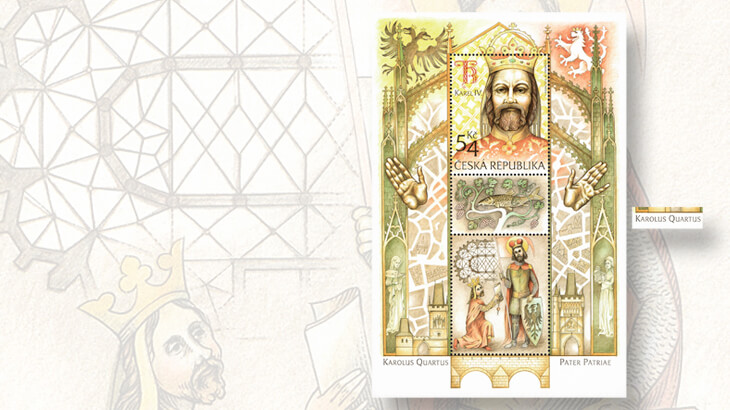 The Czech Republic soon corrected the Latin spelling mistake, issuing a second version of the sheet with the correct spelling of “quartus.”
Previous
Next

The Czech Republic recently issued two versions of a souvenir sheet due to a spelling mistake in a Latin inscription.

The souvenir sheet commemorates the 700th birth anniversary of Charles IV. Born May 14, 1316, he was crowned king of Bohemia in 1346 and holy Roman emperor in 1355.

On the original version of the sheet, his name is inscribed as “Karolus Quatrus” in Latin in the lower left selvage of the sheet. The mistake of the Latin word for fourth, “quartus,” misspelled as “quatrus” was soon noticed.

The sheet was issued May 4, and on the next day, May 5, Czech Post reported the mistake, adding that the souvenir sheet would be withdrawn from sale and a new version produced.

Czech Post said, “The letters R and T in the name KAROLUS QUARTUS were mistakenly transposed to from QUATRUS. With respect to the significance of Charles IV, Czech Post decided to reprint the miniature sheet in the correct way.”

Czech Post has not announced the issue date of the corrected version of the sheet with the inscription “Karolus Quatrus,” but used examples from mid-May are known.

Because there were no mistakes on the stamp itself, Czech Post did not let them go to waste. Czech Post said that it would remove the stamps from the unsold souvenir sheets, and that they “will be used in another way for postal purposes.”

With the exception of the new inscription in the lower left selvage, the two sheets should be identical.

Each sheet includes a  54-koruna stamp and two perforated labels.

The image of Charles IV shown on the stamp is based on contemporary portraits. His initials in the upper left of the stamp are from the 1348 charter establishing Charles University of Prague.

The small label below the stamp represents some of the king’s work supporting agriculture and the economy, specifically the creation of vineyards and ponds. The larger label at the bottom of the sheet shows the king handing the deed of foundation to St. Wenceslas.

Additional images related to Charles IV and his accomplishments are shown in the selvage, including the Old Town, St. Vitus Cathedral, and Charles Bridge building projects in Prague.