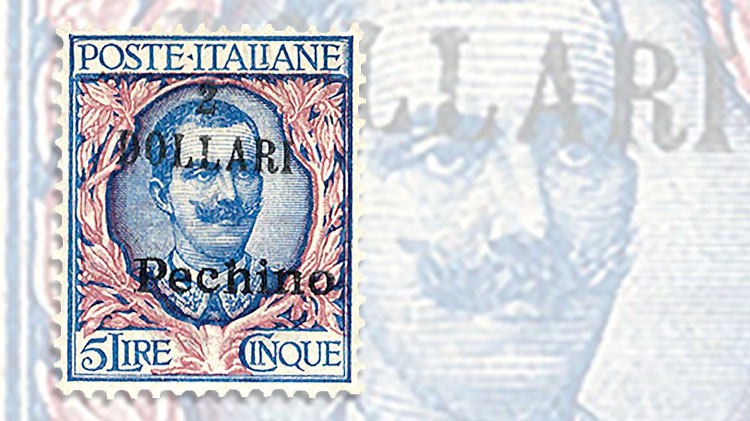 The July 8-9 Cherrystone public auction in New York City will include this rare 1920 stamp from Italian Offices in China-Peking.

The sale will present more than 1,600 lots beginning with classic U.S. stamps and covers on Wednesday morning. The selection begins with an 1845 5¢ black New York postmaster’s provisional (Scott 9X1) from position 2 with double transfer, on a folded letter mailed in 1846 to Norwich, Conn.

U.S. regular issues, including a nice selection of 1867 grill issues, proofs, coil pairs, airmails, locals, revenues and other back of the book material lead into the offering of worldwide material.

The auction has a strong selection in Great Britain and British Commonwealth and Western Europe, including Germany, with German states, colonies, field post and occupation issues.

The stamp (Scott 30a) is unused with original gum never-hinged, described as “perfectly centered” and “certainly one of the best, if not the finest” of the only 15 stamps issued.

From the same era comes a selection of the 1919 Polish postage dues created by overprinting Austria’s 1916 postage due stamps. Among these is a set of the three top denominations on ultramarine issues (Scott J8-J10), and separate lot offering the very rare 10-krone blue overprinted in black, plate 1 (J10a), considered the rarest stamp from Poland. This stamp is also from a known issue of just 15 stamps printed, with fewer than 10 now accounted for, according to Cherrystone. It has an $85,000 value in the Scott Classic Specialized catalog, and is offered in this auction with a $40,000 estimate.

The auction concludes with a number of collections and large lots again representing U.S. and worldwide material.

Collectors can view the entire sale online at www.CherrystoneAuctions.com, and live bids can be placed on the firm’s website.