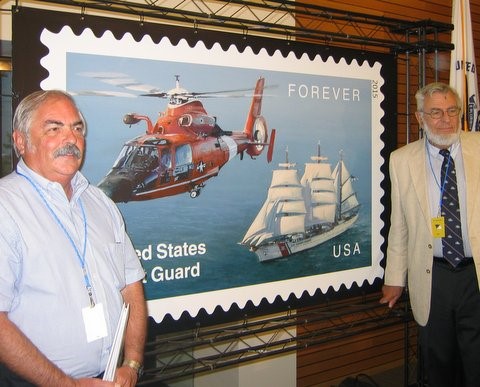 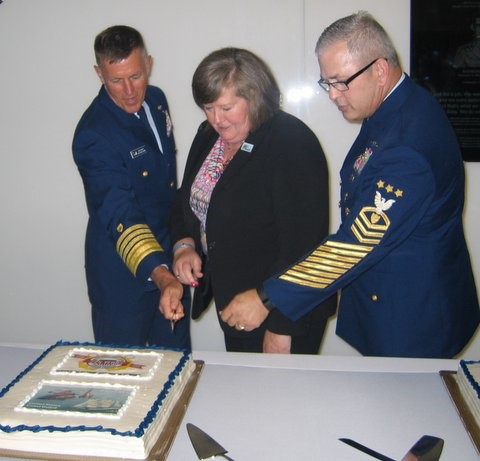 The greeting for her and the other platform guests typically is given only to dignitaries boarding U.S. ships.

But the Coast Guard rolled out its nautical welcomes as it greeted the first U.S. commemorative stamp to honor the service since 1945 (Scott 936).

Two postal cards have saluted the service, but it took the nine-year effort of two retired Coast Guard captains and a former Coast Guard petty officer first class to secure approval for the forever stamp, which features two icons of the service: its rescue helicopters and its three-masted sailing ship, the Eagle.

The new stamp made its debut at the service’s two-year-old headquarters on the grounds of what once was Washington’s major mental health hospital.

Although the U.S. Postal Service typically avoids marking anniversaries that are not in 50-year multiples, it made an exception for the Coast Guard, which marked its 225th anniversary with a combination birthday party and first-day program.

Special sheet cakes bearing the image of the new stamp were cut for stamp collectors and Coast Guard members who attended the event.

The program drew hundreds of current and retired members of the service, where they heard Department of Homeland Security Secretary Jeh Johnson praise their efforts to keep the organization at the forefront in the battle against terrorism.

“The Coast Guard is in the middle of it ... on duty every day,” Johnson said.

Brennan, who helped cut the sheet cakes for the ensuing celebration, praised the agency, saying the Coast Guard “does whatever it takes to make sure that we are protected” on the waters of the United States.

She noted that 50 million of the stamps had been printed.

“I look for them to sell out quickly,” she said, noting the eagerness of the crowd.