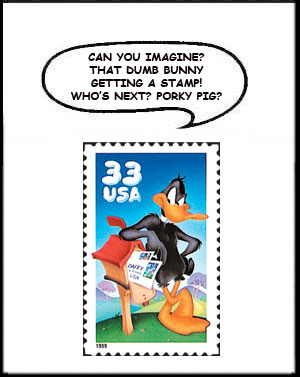 Daffy Duck wasn't the first duck on a U.S. stamp, but he is clearly the duck with the most personality — at least to us humans.

Daffy appeared on the 1999 33¢ stamp that also served as the October cartoon caption contest stamp.

As several entries pointed out, the 20¢ 1982 issue that marked the 50th anniversary of migratory bird hunting stamps was the first postage stamp to feature ducks.

That postage stamp commemorated the federal duck stamp program that began in 1932, and which produces a large and attractive revenue stamp each year featuring competitively selected duck art for the stamps that are used on that year's hunting licenses.

Many U.S. collectors are not aware of these beautiful stamps, but they are avidly collected by those who appreciate the beauty of the basic art, and the engraving of the earlier issues.

William Meentemeyer of Sarasota, Fla., recognizes this with this entry, "I'm proud to be the most famous duck, but for 80 years they've pictured all my brothers and sisters!"

Steve Kotler of San Francisco, Calif., gives this a somewhat different treatment with, "They finally picked the right duck, but I should have been on a forever stamp!"

The great majority of entries this month talked about the contents of the unusual mailbox.

Adapting a favorite exclamation that Daffy sometimes borrowed from Sylvester the cat, Paul Abajian of Essex Junction, Vt., has him saying "Coupons, coupons, coupons, but nothing for succotash!"

And in a nod to Linn's, Dieter Von Hennig of Reno, Nev., comments, "What? No Linn's again? I better try the digital edition."

The nonphilatelic winner comes from this group. Grieg Best of Sacramento, Calif., has Daffy musing, "Why is it ducks only get bills?"

On the philatelic side of our contest, David Schwartz seems to foretell the future with the clever line revealed on page 6 with the pictured stamp.

"The local Chinese restaurant named a dish in my honor — it's called ‘Peeking Duck,'" from Steve Kotler of San Francisco, Calif.

"Born in 1933, and my birthday cards are just arriving!" by Helen Parcells from Selbyville, Del.

"All this junk mail is driving me daffy!" sent by Boyd DeGeest of Winona, Minn.

"A card from Donald, three bills, and 37 political ads. The 2016 election is getting an early start!" from William Hyde of LaCrosse, Wis.

"Despite my star status, I'm comfortable in my own feathers!" by Edgar Dunlap via e-mail.

The next cartoon caption contest will be announced in the Dec. 8 Linn's.