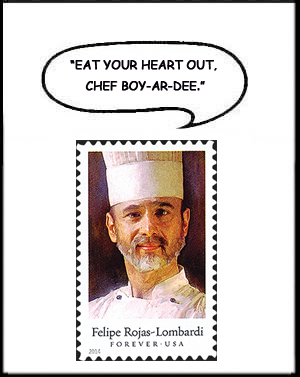 John R. Grosvenor of Misenheimer, N.C., wins one of two prizes in the April cartoon caption contest, with this nonphilatelic line that plays off the fact that this is the first time that professional chefs have been honored by the United States on stamps. The next cartoon caption contest will be announced in Linn's June 8 issue.

Lawrence Segel of White Plains, N.Y., captured the frustration of many U.S. stamp collectors with: "Why won't they let me cook up some tasty glue, then do away with all those self–adhesives?!"

For fans of the TV sitcom Seinfeld, several entries had Rojas–Lombardi channeling the character known as "The Soup Nazi" and his pejorative "No soup for you!" when customers displeased him.

Always a patron of the arts, I was tickled by the submission of Charles Chiaramonte of Valley Stream, N.Y., who adapted the stamp to a Frank Sinatra song, as follows: "Come fly with me. Let's float down to Peru. In llama–land I'm the man who can do a dish that's right for you … "

Our nonphilatelic line winner comes from John Grosvenor of Misenheimer, N.C., who has our chef taunting an even more well–known kitchen–master who has not been pictured on a U.S. stamp.

On the philatelic side, the winner is David Schwartz, who pokes fun at the USPS with, "I made 100 randomly distributed Strawberry Rightside–Up cakes. So far only 20 have been discovered."

Both winners will receive Linn's Stamp Identifier published by Linn's, or a 13–week subscription to Linn's (a new subscription or an extension). The book has a retail value of $12.99. Here are a few of the runners–up:

"Even I can't cook the books to make the USPS more palatable!" from Steve Kotler of San Francisco, Calif.

"My tongue sandwiches are so good they speak for themselves." by Edgar Dunlap, sent by e–mail.

"I had a heck of a time training our new waitress, Jenny, to serve the food right–side–up," by Thomas and Laura Tomaszek of Cedar Rapids, Iowa.

"You want fries with that?" by Bob Bess of Palestine, Texas.

Thanks and a tip of the hat to all who entered. The next cartoon caption contest will be announced in the June 8 issue of Linn's.