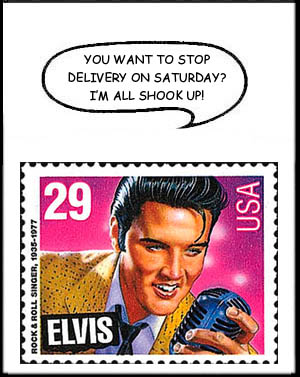 Oscar Valdes of Murphy, N.C., sent in one of the two winning entries in the April cartoon caption contest, featuring the 29¢ Elvis stamp. The next contest will be announced in Linn's June 6 issue.

About 75 percent of the entries for the April cartoon caption contest, using the 1993 29¢ Elvis stamp shown in Figure 3, combined one of his signature lines with something philatelic, or changed one of those familiar utterances to a stamp collecting thought.

Jack Leonard Jr. of Hatboro, Pa., contributes a nice example of the former with "Keep the letter rate at 29¢. Thank you, thank you very much."

Several entries referred to Elvis as the reigning champion, at the top of the list of most popular U.S. commemoratives, with over half a billion sold. From among these, David Vikan of Dickinson, N.D., suggests, "I'm still the King – 500 million stamps can't be beat!"

The great success of the Elvis stamp, by the way, was a vindication of Postmaster General Marvin Runyon's decision to issue the stamp despite Elvis having been turned down by the Citizens' Stamp Advisory Committee.

As there were precious few nonphilatelic entries, I'm departing from normal practice and naming two winners from the philatelic side. The first is from Ross Collins of Fargo, N.D., and refers to the two design alternatives initially proposed for the Elvis stamp: the young Elvis pictured on the issued stamp, and an older and, shall we say, somewhat stockier version. Collins has Elvis crooning, "Love me slender, Love me stout..."

The second, shown in Figure 3, is from Oscar Valdes of Murphy, N.C., and refers to the hopes of today's U.S. Postal Service to change the way America thinks about mail delivery.

"If I get one more 'return to sender,' I'm gonna cry like an old hound dog!" by Jack Egan of Wilseyville, Calif.

"I may only be worth 29¢, but I'll be remembered forever," from May Aginsky of Brooklyn, N.Y.

"I marked the package 'fragile' so it wouldn't get 'All shook up' by the USPS," from Thomas and Laura Tomaszek of Cedar Rapids, Iowa.

Thanks and a tip of the hat to all who entered. The next cartoon caption contest will be announced in the June 13Linn's.