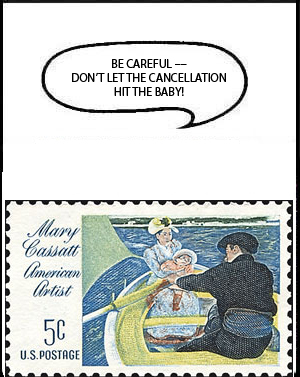 Roger Wullen of Woodside, N.Y., sent this winning philatelic line for the April cartoon caption contest. The featured 1966 5¢ the Boating Party stamp, with artwork by American painter Mary Cassatt. The next contest will be in Linn's by June 1.

Self-adhesive stamps and the difficulty in soaking them from envelope clippings were big factors in many of the April cartoon caption contest entries. The contest featured the 1966 5¢ the Boating Party stamp (Scott 1322) showing a painting by Mary Cassatt.

A good example of a soaking comment came from Raymond Smith of Springfield, Mo.: "You fixed the leak? Those nonsoakable stamps are good for something!"

Several people picked up on the fact that the right side of the boat is not pictured. Richard Smith of Wilmington, Del., turned this into: "Harry, why do you think we've been going around in circles all day – you've only got one oar!"

Today's news headlines inspired quite a few readers, with the economic situation drawing several entries. The first on this theme was from Gary Kufchak of Wadsworth, Ohio: "I hate to say it, but it looks like we're going to need a bailout."

The nonphilatelic line winner comes from the headlines originating from East Africa: "I'm sure I can outrun those pirates!" It was submitted by Thomas and Laura Tomaszek of Cedar Rapids, Iowa.

The whimsical winner on the philatelic side comes from Roger Wullen of Woodside, N.Y., and is shown in Figure 3.

Both winners will receive Linn's U.S. Stamp Facts 19th Century published by Amos Hobby Publishing, or a 13-week subscription to Linn's (a new subscription or an extension). The book has a retail value of $14.95.

"Are you sure this is how General Washington did it?" from M. Farrington of Medway, Mass.

"Since I have to row, I get to pick the song. Now where was I? Ninety-four bottles of beer on the wall . . ." sent by Terrance Hanna of Mountain View, Calif.

"Hold tight, honey. I have to row around the perforations," from John Tissot of Carpinteria, Calif.

"Uh-oh! Your father is standing on the shore with his 12-gauge!" was sent by Jo An Watson of Kalamazoo, Mich.

"Now, don't stand up or you might make this boat an invert!" suggests Roger Malcolm of Kewanee, Ill.

"Wanna buy a duck?" was sent by Reed Campbell of Pittsburgh, Calif.

The next cartoon caption contest will be announced in the June 1 Linn's.