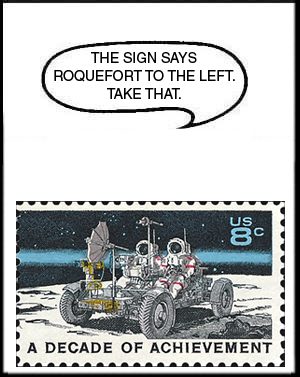 Linn's reader David D'Hondt of California is the winner of the April cartoon caption contest, which uses the 1971 8¢ lunar rover. The next contest will be announced in Linn's June 11 issue.

Getting lost, or not finding some expected destination — these were the major themes of the entries in the April cartoon caption contest featuring the 8¢ 1971 Lunar Rover commemorative cruising the moon's surface.

Another approach was taken by Kerry Vix of Atascadero, Calif., who has the driver saying "If I wanted directions, I would have brought my wife!"

Running out of gas and buying gas seems to be very much on people's minds these days, judging from the number of entries with that theme. A good example is "I hope we have enough cash to pay for these out-of-the-world gas prices," sent in by Lewis Ladwig of Port Angeles, Wash.

Don Schneider from Arlington Heights, Ill., gives us an example with: "Time to re-ink the tires. The stamps on these flats aren't getting properly canceled."

A last general theme is the call of nature, represented here by "you should have thought of that before we left the LEM!"

Choosing the winners was difficult as there were so many excellent entries, but in the end, I had to go with the first thing I remember my parents telling me about the moon, the thing about it being made of green cheese. So, the nonphilatelic winner is David D'Hondt of Sun City, Calif., with the line in Figure 3.

On the philatelic side, Jerry Sheffield of Lavalette, W.Va., takes the prize with "The postage for a letter from here would be astronomical!"

"Wow, I thought the potholes back home were big!" by Don Regole of Tucson, Ariz.

"I thought we'd be a chick magnet in this convertible," from Thomas and Laura Tomaszek of Cedar Rapids, Iowa.

"No luck! The Moon Station doesn't have the new commemoratives either," by Reid Hinson of Kill Devil Hills, N.C.

"I promised you the moon, now how about a little kiss?" from Melody Foster from Minneapolis, Minn.

"I cratered that last hole for a bogey. Let's head to the clubhouse," sent in by Wade Saadi of Brooklyn, N.Y.

"Where is this Moon River everyone is singing about?" from Gordon Dekarz of Stockton, Calif.

The next cartoon caption contest will be announced in the June 11 Linn's.