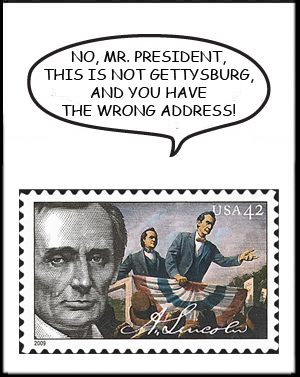 Kenny Tinsley of Texas submitted the winning nonphilatelic line for the August cartoon caption contest, which used a 42¢ Abraham Lincoln stamp from the 2009 set celebrating the president's birth bicentennial. The next contest will be announced in Linn's Oct. 8 issue.

Abraham Lincoln as an auctioneer? That's how some readers saw the illustration of the Lincoln-Douglas debate on the August cartoon caption contest stamp in Figure 3. The 42¢ stamp is one of four issued in 2009 to portray major themes in Lincoln's life on the 200th anniversary of his birth.

Bradley Miller of Huntsville, Ala., captures the auctioneer scenario with, "Lot 1 is an 1847 5¢ Franklin on cover with a Springfield, Ill., cancel. Who'll start the bidding at 2¢?"

Another major theme was political promises and how these might include philatelic content. Steve Schumann of Hayward, Calif., has this one nailed with, "I promise no more press sheets without die cuts!"

Other entries suggest that Lincoln has an eye out for food vendors in the crowd. Richard Long, by e-mail, represents this group with, "Two hot dogs with everything here!"

The nonphilatelic line winner, shown in Figure 3, has a line spoken by a staffer out of the scene. Perhaps it's a bit of a stretch, but it's a zany take nevertheless. It was submitted by Kenny Tinsley from Hico, Texas.

On the philatelic side, Edgar Dunlap of Gainesville, Ga., reflects back on the penny postal with "Four score and seven years ago, you could send 42 postcards for the price of this stamp!"

"You can't win Stephen; all the Kardashians are voting for me," by Michael Intenzo from Philadelphia, Pa.

"Hi, I'm Abe Lincoln, and I approved this message!" from Jack Leonard of Hatboro, Pa.

"My opponent in these Debates, Sen. Douglas, is best known as the ‘Hair Splitter,'" by Martin Amdur of New York, N.Y.

"Don't listen to my opponent — there is no way my election could start a war!" by Don Hurley of Charleston, S.C.

"My opponent glues his stamps into his album. Real stamp collectors should vote for me!" sent by Thomas Tonozzi of Spring Valley, Ill.

The next cartoon caption contest will be announced in the Oct. 8 Linn's.