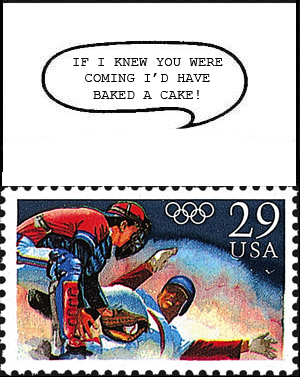 L.J. Kostrzewski submitted the best catcher's line for the August cartoon caption contest, which used the 1992 29¢ Olympic Baseball stamp. The next contest will be in Linn's by October 5 issue.

The August cartoon caption contest used the 29¢ Olympic Baseball stamp of 1992. I tried something different, and instead of requesting philatelic and nonphilatelic lines, I asked for entries to identify whether the line came from the catcher or the runner.

Some entrants did that, but many did not. Folks in the latter group might have thought that the content of the entry would make it obvious, but that was not always the case.

The dominant theme was tagging, which has one meaning in baseball and another in the stamp world. Two outstanding entries demonstrate this. The first is from Reid Hinson of Kill Devil Hills, N.C., who has the catcher saying: "Whadayamean no tag? I'll get my light and prove it to you!"

David Vikan of Dickinson, N.D., also assumes the role of the catcher with, "Tag, you're it! Oops, wrong game – you're out!"

Speaking of being out, Donna Smith from Wilmington, Del., wrote to make note of some interesting facts about the background to the stamp. It seems that the 1992 Barcelona Olympics was the first games in which baseball was a medal sport. The United States was shut out of the baseball medals, with the gold going to Cuba, silver to the Republic of China (Taiwan), and bronze to Japan.

Quite a few entries played off the financial woes of the U.S. Postal Service. A good example of this is a line from either the catcher or runner, from Bradley Miller of Huntsville, Ala.: "Could this be the last Saturday home delivery?"

The winning line for the catcher, shown in Figure 3, refers back to a 1950 pop song of that name that was recorded by two singers. The Eileen Barton version was on the Billboard charts for 15 weeks, peaking at No. 1. Georgia Gibbs also released the song, and her version went to No. 21. The use of the line here is from L.J. Kistrzewski of Buffalo, N.Y.

For the runner's line, the winner is Jo-An Watson of Kalamazoo, Mich., with "Hey, I let you win at poker last night!"

"There's no base like home!" from William MacQuarrie of Omaha, Neb.

"If the catcher interferes with a runner sliding into home, would it be called a plate block?" by Rodger McReynolds.

"Three outs for this stamp: no errors, no freaks, no oddities," from John Kachmarik of Rossford, Ohio.

Thomas Funk of Amity, Pa., sent in this line in the words of the catcher: "The umpire is my father-in-law, dude!"

Also in the words of the catcher, "Your coach wasn't waving you in. The mosquitoes swarm this time of night," sent in by Michael Intenzo of Philadelphia, Pa.

"Hey, did I tell you that I just added the 1984 Roberto Clemente stamp to my collection?" comes from Richard Novick of Marlboro, N.J.

The next cartoon caption contest will be announced in the Oct. 5 Linn's.