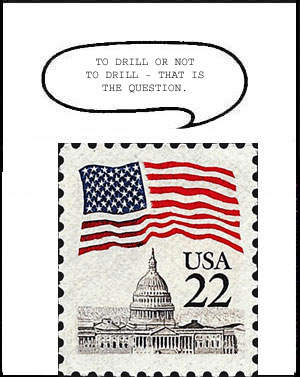 Bonnie Trigg of California, borrows from Shakespeare's Hamlet to win the nonphilatelic portion of the August cartoon caption contest. The next contest will appear in Linn's Oct. 6 issue.

Perhaps we are all a bit gun-shy about political themes. That could be the explanation for the small number of entries in the August cartoon caption contest. Summer vacations could be another reason.

The stamp used for the contest, shown in Figure 2, was the 22¢ Flag Over Capitol stamp issued in 1985.

The entries received reflect the public's low rating of Congress, some with a surprising level of harshness. This example comes from H.S. McNamara of Baltimore, Md.: "I had always thought that Barnum and Bailey's clowns couldn't be surpassed, and then my constituents sent me to Washington!"

Several entrants looked at the flag and saw it in an unusual light. A.J. Zeppa of Tucson, Ariz., represents this group with "Wow, that's the best skywriting I've ever seen!"

Bonnie Trigg of Oceanside, Calif., took one of the signature issues of our day and turned it into the winning nonphilatelic line. She borrowed a phrase from Hamlet by William Shakespeare. Her entry appears in Figure 2. It reflects the continuing partisan debate over offshore oil drilling, and drilling in the Alaska National Wildlife Preserve.

The philatelic line winner is "Let me be frank – as a Congressman I don't need to use stamps!" It comes from Greig Best of Sacramento, Calif.

"OK, there are no extra stripes. Now let's count the stars," from Ken Bonvallet of Westerville, Ohio.

"Mmmm – the aroma of freshly baked mail . . ." by Douglas Quine from Bethel, Conn.

"The blast of hot air came up though the dome and blew the flag off the pole!" sent by Ray Cartier of Arlington, Texas.

"This flag isn't nearly as big as some of the egos of my colleagues here!" from Bradley Miller in Huntsville, Ala.

"Get out of my way; the press wants me!" by Henry Ratz of Sonoma, Calif.

"This is my favorite domecile" by James Williams of St. Petersburg, Fla.