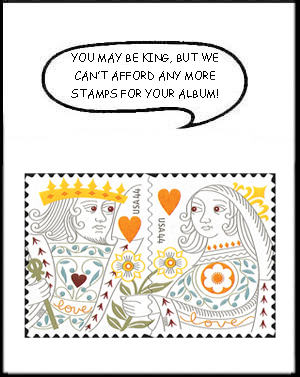 A former boss of mine had on her desk a sign that said, "It's good to be the queen."

In that same vein, a number of the cartoon caption contest entries for August put on a somewhat strident cloak while speaking as the queen in the 2009 44¢ King and Queen of Hearts Love stamp pair in Figure 2.

An earlier contest asked for words from the king. Now here are entries from a queen who exercises her authority.

"You may be the king, but I do the canceling in this court!" sent in by William Farrar of Kansas City, Mo.

Another approach is this example from Rita Storm of Tucson, Ariz.: "Here! Take these back. I said I wanted roses!"

Being among the last denominated Love stamps, before such special issues were changed to forever stamps, several entries played on the theme of permanent validity.

Roy Satine of Glen Rock, N.J., has the queen saying "I'm afraid our love was not meant to go on forever."

David D'Hont gets the soul of brevity award with, "For richer or poorer: not forever."

Another multiple-entry subject is represented by this line from Melody Foster of Minneapolis, Minn.: "Hey, your majesty, how about putting the seat down on your other throne!"

She was the first to come up with that thought, and so she is the winner of the nonphilatelic portion of the contest.

On the philatelic side, Karen Forsyth of Anchorage, Alaska, wins the prize with the line shown in Figure 2, which may cut a little close to the bone for some of us whose spouse does not have great sympathy for our collecting addictions.

"Honey I have good news... Little Jack is due in about six months!" by Thomas Misiewicz from Martinsburg, W.Va.

"The woes of the postal service are giving me a royal headache!" from Carmen Mannella of Delmar, N.Y.

"As I was saying before that rude woman slammed an ace on top of you..." sent by Roy Thompson of Saint Johnsville, N.Y.

"Why didn't we have a front seat at Will and Kate's wedding? And why didn't you get me a gown like Pippa's? And why..." by Tim Ryan of Peekskill, N.Y.

"If you think raising a child is easy, then you don't know Jack!" from Steve Kotler of San Francisco, Calif.

"The joker is wild about me. I want a divorce!" sent in by William Haslett of San Diego, Calif.

The next cartoon caption contest will be announced in the Oct. 10 Linn's.