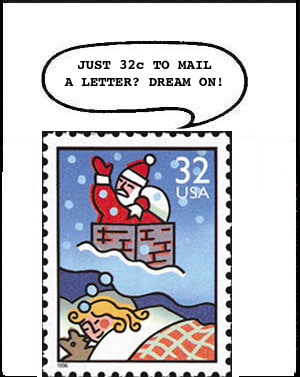 Santa chimes in with a reality check, courtesy of Mildred Barylski of Virginia. Her line is a winner in the December cartoon caption contest. The next contest will appear in Linn's Feb. 2, 2009 issue.

The current depressed economic situation moved a number of U.S. Notes readers to have Santa reflect on its effect. The December cartoon caption contest featured the 32¢ Dreaming of Santa Claus stamp (Figure 3) from the 1996 Christmas block of four stamps.

Robert Gluck captured the problem well with Santa saying, "Laying off all those elves . . . what a shame . . ."

The young lady dreaming suggested to some that she ought to think big and look for something really worthwhile from Santa's sack.

Of course, not all wishes come true, and Kless Gyzen from Waukegan, Ill., gives voice to that with the jolly old man saying, "Wish all you want little girl, but I just can't afford an inverted Jenny this year!"

Others suggested the youngster might be hoping for soakable U.S. stamps, a truly unsorted mission mix, or a grade 98 $5 Columbus stamp (Scott 245) from the Columbian Exposition issue of 1893.

The nonphilatelic line winner comes from a group of entries that lament Santa's girth when compared to the narrow size of the chimney. Milt Bowyer from Roanoke, Va., gives Santa this line: "Going down is a slide. Going up scrapes my hide!"

On the philatelic side, Mildred Barylski from Alexandria, Va., thinks about 12 years of increasing postage rates with the line shown in Figure 3.

"It's a bag of charcoal for your little brother!" by Josh Tanski of Varysburg, N.Y.

"Another year and I'm still in the red!" from Steve Kotler of San Francisco, Calif.

"When I was a kid, Christmas used to hit me like a ton of bricks!" sent in by Donald Babcock of Virginia Beach, Va.

"This soots me just fine!" from R. Heinen of Shrewsbury, Mass.

"Bye! Gotta go to the next dream . . ." by Jonathan Luxton of Mountain View, Calif.

The next cartoon caption contest will be announced in the Feb. 2 Linn's.