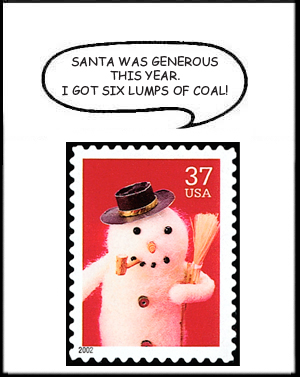 Michael Moticha from Apple Valley, Calif., won the December cartoon caption contest. The next contest will be announced in Linn's February 14, 2011 issue.

Several U.S. Notes readers picked up on the fact that the snowman in the December cartoon caption contest stamp has a traditional pipe in his mouth. This 37¢ Snowman stamp, shown in Figure 2, is one of four Christmas stamps issued in 2002.

What is significant about the pipe?

The U.S. Postal Service has a habit of removing tobacco products from the jaws of people being pictured on U.S. stamps. Blues musician Robert Johnson, on a 29¢ stamp in 1994, and artist Jackson Pollock, commemorated on a 33¢ stamp from 1999 in the Celebrate the Century series, come to mind as examples.

But I was not aware of the stamp identified by Dallas Barker of Flint, Mich., who represents this group of entrants with "I must be more important than Gen. MacArthur. They took his pipe away but left mine alone."

Postage rate increases seem to be on the mind of many, and from this group of entries the following two approaches match nicely with the stamp design.

The first is from Ron Cullers of Peru, Ind.: "They're appealing the rate increase denial . . . sounds like a snow job to me!"

The second is "Apparently my plea for a postage rate freeze didn't work!" sent in by Fred White of San Mateo, Calif.

Finally, recent Postal Service announcements have many of us thinking about forever stamps.

Representing this group of entries is "Well, that's just great — since I'm made out of snow, I can't be a forever stamp" by Joe Petitto of Hot Springs, Ark.

Picking up on the decorative additions to the snowman, Michael Moticha from Apple Valley, Calif., wins the nonphilatelic segment of the contest with the line shown in Figure 2.

On the philatelic side, Hubert Bernheim of Hilton Head Island, S.C., takes the prize with this line that recognizes that most stamp collecting work is done indoors: "Don't touch me with those warm tongs!"

"Are you crazy? I don't care how cold it is I do not want a cup of hot cocoa." by Gordon De Karz from Stockton, Calif.

"I think I'm in trouble — my feet feel warm!" from Larry Rabb of Los Angeles, Calif.

"My friend watched Katy Perry videos for three hours. All that was left was a puddle of steaming water!" sent by Michael Intenzo from Philadelphia, Pa.

"Dogs might be man's best friend, but they are not mine!" from Leon Leszczynski of Sierra Vista, Ariz.

"With a little luck I may get my big break into snow business!" sent in by Steve Kotler of San Francisco, Calif.

The next cartoon caption contest will be announced in the Feb. 14 Linn's.