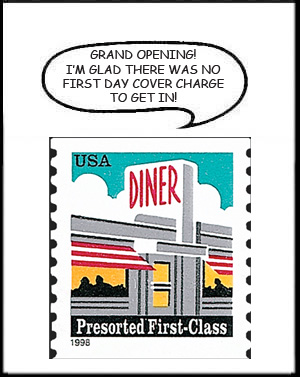 The design of the 1998 nondenominated (25¢) Diner presorted first-class stamp issued in 1998 does not include a brand name, and quite a number of entries in the February cartoon caption contest featuring that stamp played off that fact.

As David Schwartz of Commack, N.Y., put it, "Presorted First Class Diner: What a strange name!"

Others applied the title to the food, or the service, such as "Presorted First Class seating available" from Henrik Rossell of Poolesville, Md.

A more critical read was provided by Mildred Barylski of Alexandria, Va.: "First class diner? Not this one!"

Another clever approach based on the design comes from Nathan Wendland of Winona, Minn.: "I'm glad we decided to advertise in the Cloud."

Several entries focused on one of the primary features of a diner — the (usually) moldy oldies that are available on the jukebox. Most of these seemed to identify the all-time favorite of both children of the 1950s and 1960s, and of stamp buyers in the 1990s.

One example was sent in by Darlene Arendt of Chaska, Minn.: "Which record, young Elvis or old Elvis?"

I don't usually show actual entries, but will make an exception this month with the postal card shown here. In case the text is too small to read, it says, "Dinner in the diner. Nothing could be finer (than to have your ham & eggs in Caroliner). Around here we call them cafes and most had a sign that said ‘Eats' in neon of course," by James Thomas from Edmond, Okla.

The philatelic line winner comes from Dolores Chiaramonte of Valley Stream, N.Y., who blends an opening ceremony with philately, as shown nearby.

The winner on the nonphilatelic side is "Talk about inflation! Look at those prices — 29¢ for a hamburger! Who in the world can afford to eat here?!" by Thomas Misiewicz of Martinsburg, W.Va.

Both winners will receive Linn's Stamp Identifier published by Linn's, or a 13-week subscription to Linn's (a new subscription or an extension). The book has a retail value of $12.99.

"Who is this Jay Z they have on the jukebox?" from Tom and Laura Tomaszek of Cedar Rapids, Iowa.

"A snow cone for dessert! Hey, what did you expect? This is the Lake Effect Diner in Buffalo, N.Y." by Larry Winkelsas of Kenmore, N.Y.

"Let's visit the Postage Stamp Diner where everything is ordered by plate number," sent by Steve Kotler, of San Francisco, Calif.

"C'mon in folks. The food is first class, and it doesn't take forever to reach your table," from Rick Abrams of Delray, Fla.

"During the month of March, when you purchase a bun, you will have a chance of finding one of 100 randomly selected hamburgers," by Eric Wile of Greensboro, N.C.

"One stop shopping — Dine in; Mail out!" sent by Walter Robidoux of Smyrna, Ga.

"Waitress, in honor of Elvis, I'll have another bacon, peanut butter and banana sandwich!" from Edgar Dunlap by e-mail.

The next cartoon caption contest will be announced in the April 13 issue of Linn's.