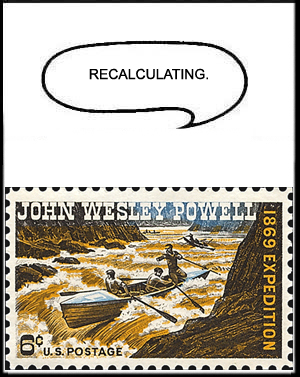 Linn's reader Paula Belair of New York is the winner of the February cartoon caption contest, which uses the 1969 6¢ John Wesley Powell. The next contest will be announced in Linn's April 9 issue.

The cartoon caption contest stamp for February was the 6¢ John Wesley Powell commemorative of 1969, which pictures a notional scene from his exploration of the rivers of the Grand Canyon in 1869.

The stamp shown in Figure 3 conveys that the trip was a perilous one, not to be undertaken by the faint of heart.

U.S. Notes reader Bill Smith of Arvada, Colo., helps to put this in context with a quote from one of Powell's men. This was said by George Bradley on Aug. 11, 1869, at the mouth of the Little Colorado River, just prior to the most difficult part of the trip:

"Thank God the trip is nearly over. It is no place for a man in my circumstances but it will let me out of the Army, and for that I would almost agree to explore the River Styx. The men are uneasy and discontented and eager to move on.

"If the Major [Powell] does not do something soon I fear the consequences, but he is contented and seems to think that biscuit made of sour and musty flour and a few dried apples is ample to sustain a laboring man. If he can only study geology he will be happy without food or shelter but the rest of us are not afflicted with it to an alarming extent."

Several readers took note of the fact that Powell is in the back of the boat steering, and not sitting like the rowers. An excellent example, from Steve Kotler of San Francisco, Calif., is: "This is the last time I buy a standing-room-only ticket on a budget cruise."

Another, with a historical twist is, "I figured if George Washington could stand up in his boat, so could I, but this is nuts," from Kenneth Bonvallet of Westerville, Ohio.

The idea that mail might be aboard inspired other entrants. W.E. Churlik of Burnesville, N.C., has Powell saying, "This is the last time I volunteer for special delivery duty!"

A different approach, playing off the scene shown, is "I don't think this is what the postmaster general meant when he initiated Rapid Express Service!" This was sent in by Robert Behenna Jr. of Everett, Mass.

That leads to the entry chosen as our philatelic line winner, from R.D. Kloka of Carleton, Mich.: "I sure am glad we're not on the Niagara Falls stamp!"

On the nonphilatelic side, I'm hoping most U.S. Notes readers are familiar with automotive global positioning systems, and the curt response one hears from the GPS after failing to follow the machine's directions.

The winning one-word entry is shown in Figure 3. Its author is Paula Belair of North Tonawanda, N.Y.

"But the river looked so small from the top of the canyon," by Bob Bialo from Cary, Ill.

"Boy, am I up a creek. Thank goodness I have a paddle!" from John Leonard of Hatboro, Pa.

"You and your shortcut to the stamp show!" by Boyd Degeest of Winona, Minn.

"Glad I didn't bring my water-activated stamps," from Jack Egan of Wilseyville, Calif.

"Dang! I forgot to mail that insurance payment!" sent in by Reid Hinson from Kill Devil Hills, N.C.

"When it comes to buying great stamps, I go overboard!" by Beth Harmon from Holiday, Fla.

"After three months of this, the traffic on I-40 doesn't look so bad," from William Kriebel of Philadelphia, Pa.

The next cartoon caption contest will be announced in the April 9 Linn's.