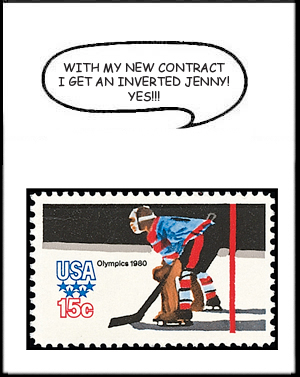 Walter T. Schmitt of Chicago submitted the winning philatelic line for the February cartoon caption contest, using this 1980 15¢ Winter Olympics stamp showing a hockey player. The next contest will be announced in Linn's April 11 issue.

With two grandsons playing hockey, I thought the 1980 15¢ Winter Olympics stamp in Figure 3 might make for an interesting cartoon caption contest subject in February. The small number of entries submitted, however, suggests to me that hockey is not high on the list of favored sports among U.S. Notes readers.

Some entries were very earnest, convincing me that hockey fans take their sport seriously. One example captures perfectly the bravado and self-confidence a successful goalie needs to have. The best goalies are not quivering in their knee pads, hoping that no one will take a shot. Instead they are waiting for an opportunity to do what they do best. Portraying this, Ray Meyer of Anderson, Calif., has the goalie asking, "Do you feel lucky?"

Michael Moticha of Apple Valley, Calif., felt his inner poet, and has the goalie saying, "If the puck comes my way, I'll stop it in flight, protecting the goal I hold dear. Then we can, in triumph, raise our sticks high, enjoying the win that is near."

Of the two most popular entry themes, one addresses a topical postal issue. Elaine Frankowski of Minneapolis, Minn., represents this group with "Just try to get that postal rate increase by me!"

The philatelic line winner for this month, shown in Figure 3, makes me wish I could negotiate a pro sports compensation package. It comes from Walter T. Schmitt of Chicago, Ill.

On the nonphilatelic side, Wade Saadi of Brooklyn, N.Y., is the winner with a line that may be obscure unless you are a true hockey fan: "First we'll Finnish the Russians, then we'll be Russian to the Finnish."

"What a time for my cell phone to ring!" from Thomas and Laura Tomaszek of Cedar Rapids, Iowa.

Thanks and a tip of the hat to all who entered. The next cartoon caption contest will be announced in the April 11Linn's.