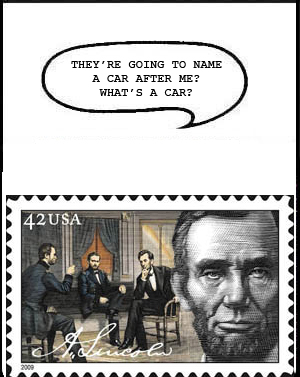 Jon Berger of Alabma sent in this winning entry for the February cartoon caption contest. The featured 42¢ Abraham Lincoln stamp is one of four issued Feb. 9 to honor the 200th anniversary of Lincoln's birth. The next contest will be in Linn's by April 6.

In responding to the February cartoon caption contest, U.S. Notes reader John Traver mentioned that the painting featured on the 42¢ Abraham Lincoln stamp, shown in Figure 3, originally included Rear Adm. David Porter. On the stamp design, Porter is hidden by the large head of Lincoln.

The painting, called The Peacemakers, is by George Peter Alexander Healy.

For example, Margot Best of Sacramento, Calif., had Lincoln ask, "I do hope you gentlemen are current on your taxes?"

Frank Varga of Toms River, N.J., had Lincoln making financial calculations: "Let's see: $20 million to the buggy industry, $5 million for building more stables, $3 million for top hat design development — and we'll pray the next generation can pay for it all."

Also, many entries included the caption, "A penny for your thoughts," and a small group of entries suggested that one day postage rates might reach "Four score and seven cents."

For the philatelic line winner, David Vikan of West Fargo, N.D., drew a parallel between today and Lincoln's time: "Gentlemen, we are in the midst of a national crisis. The post office issued six new stamps last year. We have to get their output under control!"

On the nonphilatelic side, Jon Berger of Huntsville, Ala., takes the prize with the line in Figure 3.

"Ulysses, stop saying 'I'll drink to that!' when you agree with what I say," by Michael Intenzo of Philadelphia.

"Blah, blah, blah . . . I wonder what Mary is having for supper . . ." sent by Stephen Debes from Colorado Springs, Colo.

"Four score and seven years ago our fathers brought forth a postal rate of 2¢!" from Ken Grothoff of O'Fallon, Mo.

"I wish I could recall the ZIP code for the Gettysburg address," from Roberta Muelling of Conway, Ark.

"What shoes go with my new stovepipe hat?" by Judy Greenwell of Louisville, Ky.

Thanks and a Lincoln's tip of the top hat to all who entered.

The next cartoon caption contest will be announced in the April 6 Linn's.