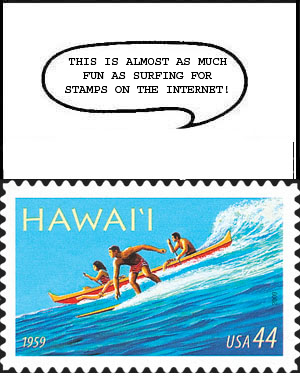 Frank Mallalieu of Oro Valley, Ariz., is the winner of the philatelic line portion of the January cartoon caption contest, featuring the 44¢ Hawaii Statehood commemorative from 2009. The next contest will be in Linn's by March 1, 2010 issue.

Many of the entries in last month's cartoon caption contest, featuring the 44¢ Hawaii Statehood stamp shown in Figure 4, cast the surfers and canoe paddlers as postal employees.

Delivering the mail was the predominant theme for one group of authors; exemplified by "Express Mail delivery – aloha style!" from Lt. Col. William Farrar USAF (Ret.).

Another approach had the surfing employees assessing the state of the U.S. Postal Service's finances. Grant Berry of Hughesville, Pa., has a good example with "I can't relax. I keep thinking about the wave of red ink chasing us!"

If we can gauge the concerns of stamp collectors from the entries, then their inability to soak recent U.S. stamps off their envelopes is still very much on their minds.

Of the many entries in this category, this one seems to capture the spirit of frustration: "I wonder if salt water will work to release self-stick stamps?" It is from Robert Habermehl from Milwaukee, Wis.

Quite a number of readers took their cue from the fact that the image shows the surfers seemingly riding a swell downward toward the beach. Quentin Skoulund of Illinois, has them saying "Look out below!"

The winner on the nonphilatelic side of the contest casts the surfer in the role of a sports reporter who went the extra mile: "This is the last time I cover an outrigger race for ESPN!" comes from Thomas and Laura Tomaszek of Cedar Rapids, Iowa.

On the philatelic side of the contest, Frank Mallalieu of Oro Valley, Ariz., takes the prize with his entry, which references the popularity of shopping for stamps online, as shown in Figure 4.

"With a 6¢ rate hike I could be on Hawaii 5-0!" sent by Steve Kotler from San Francisco, Calif.

"The self-adhesive on my surfboard sure keeps my feet from slipping." sent by Robert Finck from Fenton, Mo.

"Neither rain, nor snow, nor dark of night, nor the Big Kahuna ..." from Greg Hillenburg of Perryman, Md.

"The Pony Express was fast, but it can't beat the surfer express," from Ross Collins of Fargo, N.D.

The next cartoon caption contest will be announced in the March 1 Linn's.