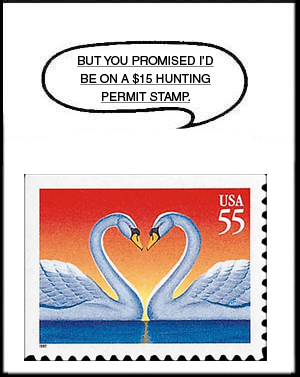 Linn's reader Robert Hinrichs of California is the winner of the January cartoon caption contest, which uses the 1997 55¢ Love Swans. The next contest will be announced in Linn's April 9 issue.

Thanks to U.S. Notes readers for the bumper crop of entries for the January cartoon caption contest, which featured the 1997 55¢ Love Swans stamp shown in Figure 2.

Not unexpectedly, a major theme of submissions was how perfect the design would have been in the present day.

George Kabusk from New Cumberland, Pa., represents these entries with "Yes, Dear, I will love you forever, even if we are not on a forever stamp."

A variation comes from Scott Huffman of Dallas, Texas, who resorts to poetry: "My love for you dear, so grand and so great, requires more than a standard letter's rate."

The most popular entry derives from the most obvious physical attribute of the swans: "Let's neck," sent in by over a dozen people. In second place was reference to bad breath, with this entry from Terry Jordan of Potomac Falls, Va., capturing the thought best: "Did you have fish for lunch? Have a breath mint!"

The nonphilatelic line winner for this month comes from Ron Tweed of Letitz, Pa., who gives contortion a new meaning with "Now turn on the green lights and we'll do a shamrock."

On the philatelic side, the winner, as shown in Figure 2, is Robert Hinrichs from Corona Del Mar, Calif., whose entry describes perfectly how sometimes, enough is never enough.

"What do you mean, you accidentally put on glue stick instead of Chap Stick?" from Steve Kotler of San Francisco, Calif.

"Heads! I won. I'll defend the north end of the pond," by Reid Hinson of Kill Devil Hills, N.C.

"You know, I have this feeling I've seen you before..." sent in by Joe Petitto of Hot Springs, Ark.

"I'll sign your pre-nup if you agree in writing that I pick the pond and we get a poured concrete cabana," from Donna Smith of Wilmington, Del.

"Your album or mine..." by William Kriebel of Philadelphia, Pa.

The next cartoon caption contest will be announced in the April 9 Linn's.