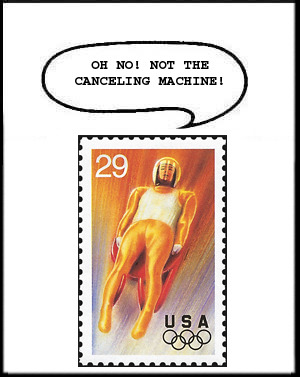 Margot Best from Sacramento, Calif., submitted this caption for the 29¢ Luge stamp from the 1994 Olympic Winter Games. The next contest will be announced in Linn's September 2 issue.

A luge competitor is featured on the 29¢ stamp shown in Figure 2.

The stamp is from a set of five issued in 1994 to celebrate the upcoming Olympic Winter Games in Lillehammer, Norway, and was the subject of the July cartoon caption contest.

The man on the sled looks like he is hanging on by his fingertips, and that was what most of the entries in this contest seemed to focus upon.

Stephen Zook of State College, Pa., represents this group with "Mercy, I could use some of that self-stick stamp adhesive about now!"

Speed, and how it might integrate with mail carrying, was the second most popular theme.

Leon Leszczynski of Sierra Vista, Ariz., reflected this combination with "The USPS never said special delivery mail had to be carried this way!"

Even the luge suit itself got some attention from readers. My favorite among them is "Oh darn – my Fruit of the Looms are riding up on me!" sent in by Melody Foster of Minneapolis, Minn.

The philatelic line winner, shown in Figure 2, does a nice job of marrying the illustration with a necessary postal event from the view of the athlete. It comes from Margot Best from Sacramento, Calif.

On the nonphilatelic side, Raymond Maggio of Brooklyn, N.Y., highlights the position of the luger with "Last time I laid down on the job I got fired. Now I'm going for the gold!"

"Now I know why the line for this ride was so short! by Tim Liljeberg of Brooklyn Park, Minn.

"They thought I was joking when I said 'Give me a brake,'" from Craig Selig of Fort Wayne, Ind.

"How do I collect $200 when I pass go?" by Robert Birkenstein of Fountain Valley, Calif.

"What kind of bet was that? Heads I win, tails I luge?" sent in by Steve Kotler of San Francisco, Calif.

"Uh-oh! This is gonna hurt!" by Scott Turner of Columbia, S.C.

The next cartoon caption contest will be announced in the Sept. 6 Linn's.