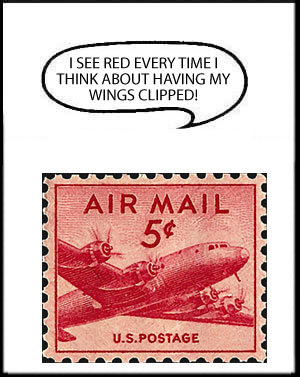 Edgar Dunlap wins the philatelic portion of the July cartoon caption contest. The Maintain Tire Pressure forever stamp is from the 2011 Go Green stamp issue. The next contest will be announced in Linn's Sept. 9 issue.

Not surprisingly, more than half the contest entries referred to the fact that the plane in the smaller stamp was a trimmed version of the larger plane. The entire plane could not fit in the smaller design space.

Of these entries, current events influenced many captions, with some form of "If it weren't for sequestration, I would still have the rest of my wings and tail!" which was sent in by Bob Pyznar from Burlington, Pa.

Several entries focused on the color of the stamp. Gene Zhiss of Charlotte, N.C., took his cue from the Air Force song, with "Off we go into the wild red yonder..."

It's an entry from this group that takes the contest prize for the best philatelic line, as shown in Figure 3. This winner was sent in by Edgar Dunlap, of Gainesville, Ga.

On the nonphilatelic side, Marc Chalfin from Barnegat, N.J., refers to reported concerns that grounded the new Boeing 787 Dreamliner fleet earlier this year, with "I'm ready for a problem-free flight. We just installed our new lithium-ion batteries!"

"When they told me they were reducing the size of the fleet, this was not what I had in mind!" by Steve Kotler from San Francisco, Calif.

"Hop aboard boys and girls – just 5¢ a ride." sent by Joel Meyerson from Annandale, Va.

"Ho! Ho! Ho! Rudolph was not happy when I told him I would be modernizing Christmas deliveries," sent in by an anonymous reader.

The next cartoon caption contest will be announced in the Sept. 9 Linn's.