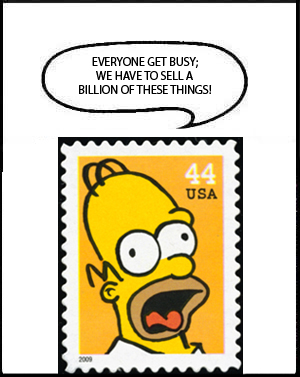 David Trutwin of Minnesota won the Philatelic part of the June cartoon caption contest featuring the 44¢ Homer Simpson stamp. His comment remarks upon the print quantity for The Simpsons set. The next contest will be in Linn's by August 3.

As might be expected, using the 44¢ Homer Simpson stamp, in Figure 3, as the cartoon caption contest stamp for June, drew many entries commenting on the entire set of five The Simpsons stamps.

Probably the most biting entry came from Michael Intenzo of Philadelphia, Pa., who has Homer saying: "If you want beautiful, meaningful, well-designed stamps in your album, collect Canada!"

Others used the opportunity to reflect on the change in paper standards that makes stamps of the last couple of years stick tightly to envelopes. From Richard H. Knight Jr., of Nashville, Tenn., comes this line: "Yo, Bart! It's easier to soak the public than this paper!"

The final grouping of entries reflected upon the Postal Service's rule requiring that people must be deceased for five years or more before they can be honored on a U.S. stamp. Gail Saadi of Brooklyn, N.Y., represents this thought with a pithy, "D'oh! I must be dead!"

The nonphilatelic line winner ties Homer's unusual appearance with his occupation as safety inspector at a nuclear facility: "I used to look like George Clooney before my mishap at the power plant!" comes from Donna Smith of Wilmington, Del.

On the philatelic side, the winning line shown in Figure 3 reflects on the substantial print quantity announced for this stamp issue. The line is by David Trutwin of Bowlus, Minn.

Both winners will receive Linn's U.S. Stamp Facts 19th Century published by Amos Hobby Publishing, or a 13-week subscription to Linn's (a new subscription or an extension). The book has a retail value of $14.95.

"Recognition at last!" from May Aginsky of Brooklyn, N.Y.

"I'm the head of this family . . . you can't wash my mouth out with soap!" by Lester Wilson of Saratoga Springs, N.Y.

"I can't believe I've just been named the next 'American Idle!'" sent by Steve Kotler of San Francisco, Calif.

"What do you mean you never saw me on TV . . . got your head in a stamp album?" by Jack Sivori from Woodland Hills, Calif.

"Not only can't I get commemorative stamps at this post office, there's no doughnut stamp here either," from Robert Kalish of Bayside, N.Y.

The next cartoon caption contest will be announced in the Aug. 3 Linn's. You can bet it will not be another stamp from The Simpsons set. Those who commented on my question about using another stamp from the set were overwhelmingly against the idea.

Even the most positive comment, from Bruce McPhee of West Yarmouth, Mass., contained a negative: "I don't much like cartoon and poster stamps, but all stamps issued should be fair game for your cartoon contests."

Maybe some day down the line.