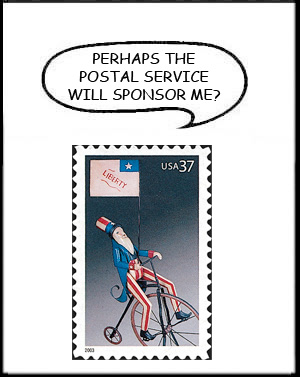 Charles Cross of Maine is the winner of the philatelic line portion of the July cartoon caption contest using the 37¢ Uncle Samstamp from the 2003 Old Glory prestige booklet. The next contest will be announced in Linn's Sept. 10 issue.

Reducing fossil fuel consumption and Postal Service expenditures were linked together by several entries in the July cartoon caption contest, which featured the 2003 37¢ stamp in Figure 2, from the Old Glory prestige booklet, the second of three such booklets produced by the USPS between 2000 and 2004.

The stamp itself pictures an illustration of Uncle Sam on what has been called a "Penny-farthing" bicycle. The old British penny coin was quite large and the farthing, a quarter of a penny, was relatively small.

Some entries emphasized the post office, such as Uncle Sam saying, "I’m trying out the latest ‘green’ mail delivery method from the USPS," sent in by Thomas and Laura Tomaszek of Cedar Rapids, Iowa.

Others put patriotism in the spotlight, as with this entry from Nick Coppolillo of Dyer, Ind.: "Liberty for all! No gasoline needed!"

A different theme was Uncle Sam being tired of riding what looks to be a somewhat uncomfortable bike; a plaintive example using the famous "I Want You" poster but substituting a new ending: "I want you to get me off this thing!" with the first entry using it from William Kriebel of Philadelphia, Pa.

The same complaint may have occurred to Uncle Sam as basis for the nonphilatelic winner. Galen Naber of Roseville, Minn., has Sam saying, "Give me liberty or give me a new Schwinn bicycle!"

The philatelic line winner, shown in Figure 2, plays off the past USPS relationship with Lance Armstrong and the United States Postal Service cycling team. It is from Charles Cross of Stockton Springs, Maine.

Both winners will receive Linn’s Stamp Identifier published by Amos Hobby Publishing, or a 13-week subscription to Linn’s (a new subscription or an extension). The book has a retail value of $12.99. Here are a few of the runners-up:

"With gas at $4 a gallon, what do you expect?" created by William David Webb of Rydal, Pa.

"Where was I on the 4th? I’m pleading the 5th!" from Steve Kotler of San Francisco, Calif.

"Do these pants make me look fat?" by Alex Loper of Sandpoint, Idaho.

"Riding this highwheeler, I’m so glad this isn’t a forever stamp" sent by Larry Wineklsas of Kenmore, N.Y.

The next cartoon caption contest will be announced in the Sept. 10 Linn’s.